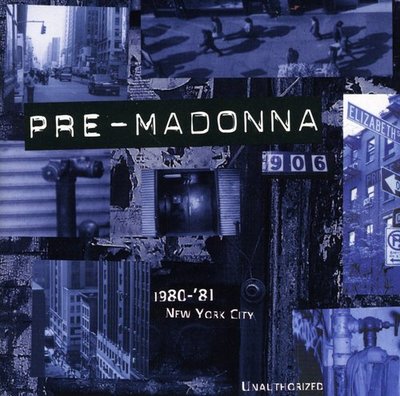 Is Your Madonna Collection Complete? Not without Pre-Madonna! No Madonna Collection Is Complete Without These Early Recordings! Listener reviews: I recently got my Pre-Madonna disk in the mail, and I love it! I just can't believe that this is Madonna (even though I know it is really her). Well, okay, perhaps 'can't believe' is exaggerating slightly, but comparing the pre-Madonna to Madonna now, one can certainly sense how her vocal ability has changed. It is funny how I received this CD around the time Evita is out, therefore all I can do is compare and contrast. First of all, Pre-Madonna actually reminds me of Madonna's 1994 album, Bedtime Stories. The type of music sounds similar. I have to admit I don't know much about naming musical genres, but I would classify both albums as light dance music, kind of R&B (I think). The first song, Laugh to keep From Crying, reminded me instantly of Alanis Morissette! True! Madonna's voice take on Alanis' 'just say the vocals kind of care-free like', in my opinion. I found this rather... Ironic! :-) It's a little hard to pick a favorite, since many of the songs on this CD are similar in the type of music. I would have to choose Burning Up as my favorite, since it gives me a 'high'. I do remember hearing this song on Robin Leach's Madonna Exposed special , if I recall correctly. The general innocence of the lyrics (simple sweet love) is calming and relaxing to listen to, while still provoking a sense of 'get up and dance'. These tunes would be great in a dance club. One does sense with Madonna's vocals is: Boy, she has come a long way since these tracks. She has evidently improved so much with respect to using her voice to project and emphasize. It is worth it to compare Pre-Madonna to Evita, and how time, age, and work have managed to create the enthralling beauty of Madonna's voice (in my opinion). In Pre-Madonna, her voice is quite low, and sometimes even sounds a little boyish. The producers of the album have done a marvelous job of digitally-remastering the melodies. In a way, it's hard to believe that the songs in this album were recorded 17 years ago!!! I have to admit that the music in this album sounds similar to the type of music that is generally popular today, and I find this, well, rather neat! (oops, there's that word that Madonna hates :-) The song Ain't No big Deal, in the beginning, truly made me think of an exercise video! Madonna repeats the phrase (she more says it than sings it) : 'Reach out, reach out!', and I have to admit I found this part rather funny to listen to. Also, this CD is in conjunction with Steven Bray, the guy who worked on a lot of later madonna albums in the 80s that were VERY successful. Happy customer, Angie Hung Hey! I'm a radio announcer at Z95.3 in Vancouver, BC. I ordered Pre-Madonna just before Christmas and finally got it last week... WOW! I immediately brought the album to my music director and we're currently featuring tracks from the album on the air. As a matter of fact, Everyboby '97 is a 3 night BuzzCuts champ! BuzzCuts is a 'battle of the bands' type of program where we put 2 new songs against each other and the listeners vote. Madonna has beaten New Edition, Live and Crystal Waters so far. Tonight at 8p PST she'll be up against the Fugees. I've been talking up your album and announcing the URL a lot on the radio, so expect some more Canadian orders! If you'd like to hear if Madonna wins, check out http://www.z95.com tonight at 8p PST. Our station broadcasts in RealAudio 3.0, so check it out! Catch the buzz... pass it on. buzz. THIS CD IS TRUELY AMAZING. IF YOU HAVEN'T ORDERED IT YET , YOU NEED TO. THESE ARE THE BEST DANCE MIXES OF EARLY RECORDINGS. MADONNA HAS TO WORK WITH STEPHEN BRAY AGAIN. EVERYBODY 97 IS BEYOND WORDS.....I JUST RECEIVED MY COPY AND HAVE BEEN LISTENING TO IT OVER AND OVER. THIS IS TRULY GREAT AND A MUST HAVE. BRIAN WILLIAMS I love this album, any madonna fan needs to buy this, though this album could have used a few more rare tracks, it's quality it immaculate, songs are good, catchy, the best song was 'Crimes of passion' i've heard all of the pre-madonna songs, such as 'Get up' 'get down' 'drowning' 'simon says' and most of them are good catchy, but i have to ask when the unreleased songs are gonna be released and also, i would like to know a list of unreleased madonna songs, is 'Love attack' really a song? made up? [email protected] OR [email protected] Hi there! I recieved my 'Pre-Madonna' CD today off you guys and I must say it brought a smile to my face! Definitely a seminal collection of tracks. Hearing the original version of 'Burning Up' reminded me of why that track off her first album has so much meaning to me. Who can forget the first time they saw the video for 'Burning Up' on television? Not me! When you're a 14 year old boy with hormones racing everywhere, seeing the embodiment of adolescent carnal desire right in front of you can be quite startling. Ever since that moment in 1983 I've been smitten! The electro/synth sound of the late 70s/early 80s is such a gas! I love 'Don't You Know' for that reason alone! In all, a worthy addition to any serious Madonna collector! Thanks, Steve! Terry Hoffmann Australia.

Here's what you say about
Madonna - Pre Madonna.