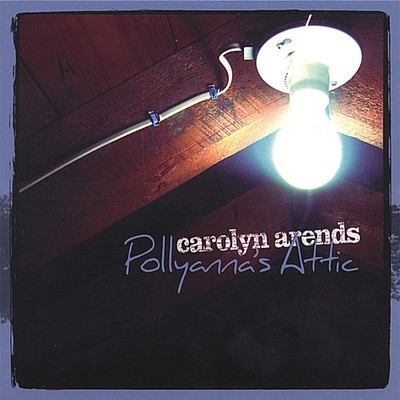 ABOUT POLLYANNA'S ATTIC: It feels good to tell the truth, even when it is hard, and it feels good to hear it too, especially when it is couched in great songs by an amazing songwriter like Carolyn. In her own words, she says this album is 'darker', but I hear hope more than anything, and the light that comes with telling the truth. - Sara Groves, recording artist I just finished listening to Pollyanna's Attic for the first time. I'm sitting here with the little flutter in my stomach that you get when you witness something beautiful. It's inspiring to see that over the last decade that I've been a fan of Carolyn's music, her gift has not grown stale--it has flourished. Carolyn is one of those uncommon artists who manage to keep writing songs that actually have something to say. And that's saying something. - Andrew Peterson, recording artist I've been a fan of Carolyn's work for a long time, but recently I heard Pollyana's Attic and I discovered a whole new level of depth and complexity to her work. 'Something to Give' continues in the great tradition of Carolyn's best work. But several songs go to new levels, from sharp social commentary in 'Everybody Wants Everything' to some of the best satire I've heard in a long time in 'Free'. - Brian McLaren, author/activist What a freakin' great album! Who but Carolyn could write penetratingly from the shadows and loss of our society's tragic and wayward individualism, and yet leave the listener with a good hope? Carolyn is a master of her craft, she keeps getting better and we are the better for it. - Steve Bell, recording artist I came to "Pollyanna's Attic" with high expectations. But Carolyn Arends exceeded them. In a word, her album is powerful. In more words, it is stunningly, movingly powerful. - Kevan Breitinger, christianmusic.suite101.com FROM THE ARTIST: The night of January 1st I couldn't sleep, and as I tossed and turned I started thinking about a collection of songs I've written and kept close to my heart but never recorded. Most of these songs are a little "darker' ... not hopeless songs, but songs about the kind of hope that shows up more in the cracks and fissures of our lives than in our pinnacle moments. Many of these tunes have been slated to be on other projects I've recorded, but in each case they just didn't end up fitting with my sunnier material. Maybe I was a bit afraid to record them. Some were a little too real, and maybe a little too grumpy, for me to go public with them. But that sleepless first night of 2006, it suddenly seemed important that I record those songs. And as soon as I gave myself permission to do a project like this, brand new songs started arriving as well. So here I am with a collection of songs old and new, all in some way about a dissatisfaction I hope I can accurately call a Holy Discontent. Musically, we did our best to keep this record very stripped down and pure. We hope we've captured a musical honesty appropriate to the candor of the lyrics. We live in a broken world, a world in which our spirits - like all of creation -- groan as we wait for a long-promised reconciliation between (in the words of Brian McLaren) "what we hope for and what we have, what we could be and what we are, what we believe and what we see and feel." I do believe that we will one day be all that we were created to be, and that what we hope for won't even come close to what awaits us. But in the meantime, there's no point denying the ache. It's a part of who we are, it's a promise that we won't always be this way, and it's a call to participate now in the Kingdom of Heaven by decrying injustice and living love. Thanks for listening, Carolyn Arends ABOUT THE ARTIST: 'One of the most affecting communicators in any genre' - Billboard Magazine Carolyn Arends has released 9 albums and is the author of 2 critically-acclaimed books. 15 of Arends' songs have become top 10 radio singles on the Canadian pop and US Christian charts. Arends has earned 2 Dove Awards, 2 Juno Nominations, and was recognized as the West Coast Music Awards' Songwriter of the Year. Her newest project, Pollyanna's Attic, is already being heralded as her most honest and beautiful work. Accolades aside, Arends is known for songs and books that stir the soul, and a warm, engaging style that leave her audiences feeling like they've found a new best friend. "I don't write songs and books as much as I get ambushed by them," Arends confesses. "And I write primarily about God because he is what captivates my imagination. The idea that we can know the Creator of the Universe, and that he knows us ... I simply can't think of any more fascinating subject matter." Arends graduated from Trinity Western University in Langley, BC with a degree in psychology and English. She lives in Surrey, BC with her husband Mark, eight-year-old son Ben, and five-year-old daughter Bethany.

Here's what you say about
Carolyn Arends - Pollyanna's Attic.