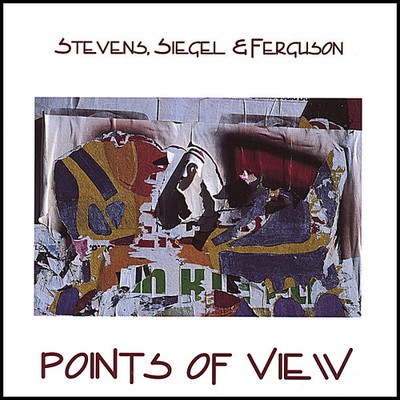 Review from Rambles-cultural Arts Magazine Stevens, Siegel & Ferguson, *Points of View* (Imaginary Records, 1997) I don't have a clear memory of the first time I heard a live jazz band, but I do remember simultaneously enjoying the experience and being confused by it. Parts of the music and the talent behind it had obvious appeal, but the digressions, improvisations and rearrangements baffled me. My ears were as yet too unseasoned to grasp the full sound. I don't specifically remember the music from that first live jazz band, either. Still, I'd like to think it might have been similar to Stevens, Siegel & Ferguson's *Points of View*, which presents the relaxed but focused sounds of piano, bass and drums as they run through a series of original compositions, jazz classics and other material. Michael Jefry Stevens, Jeff 'Siege' Siegel and Tim Ferguson join to form a group that's well integrated but still allows plenty of space for each member to show off their considerable individual skills, both as gifted instrumentalists and as original composers. The varied compositions here, as expertly supported and expanded on by three considerable talents, gel to produce impressive results. The 68-plus minutes of diverse yet cohesive music on *Points of View* provide ample examples of this approach. The trio's bouncy, nearly flippant arrangement of Ornette Coleman's 'The Blessing' includes a nice slot for Siegel and Ferguson to trade and intertwine riffs, while Stevens' new arrangement of the tired 'A Bicycle Built for Two' features beautifully wistful piano work and recasts the song as a sentimental look back at a simple pleasure from a less naive vantage point. The original Stevens composition 'Almost a Rhythm Tune' is unexpectedly catchy, opening with a engaging drum and bass combination and a straight ahead melody before digressing into improvisations and discordant piano intensity, only to have the original sweet melody resurface later, just when it has been relegated to memory. 'Threads,' written by Siegel, builds on a blues base and maintains a quick percussive feeling of tension, with Siegel's drumming driving the song from underneath before surfacing for a solo slot in the song's midsection. Ferguson's 'Astor's Place' flirts with tango, the buoyant energy it generates carrying into a set of exchanges between Ferguson's wide but mobile bass and Stevens' light flittering piano, with Siegel's drums keeping the song together and moving forward. All told, *Points of View* presents a great deal of music to absorb, but it's an enjoyable and worthwhile effort, with new touches revealed upon each new listening. As a relative newcomer to the mystical arts of jazz, I still feel a bit confused by those whose knowledge of those arts so thoroughly outweighs my own, and Stevens, Siegel & Ferguson clearly fall into that category. But I've come to regard that confusion as a good sign that I'm learning. In this case, it's a sign that I'll be returning to *Points of View* again in the future as a humble student, one wishing to learn from these particular masters for some time to come. [ by Ken Fasimpaur ]

Here's what you say about
Siegel Stevens & Ferguson - Points of View.