Song of the Lakes - Poets Say 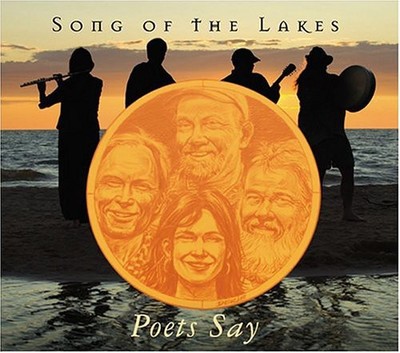 Group members Michael Sullivan, Lisa Johansson, Ingemar Johansson, and Rick Jones first joined together as Song of the Lakes in 1983 at the opening of the Northwest Michigan Maritime Museum in Frankfort, Michigan. Since then, the band has played a multitude of venues from festivals, civic events, clubs, and schools. Although our sound is often described as an original 'new folk' music with a maritime flair, we incorporate a range of genres including Celtic, Scandinavian, acoustic rock and Great Lakes World Music. All of the instruments are acoustic and include guitars, mandolins, flutes, piccolo, bouzouki, Swedish nyckelharpa (key fiddle), concertina,harmonica, bodhran, and a number of eclectic percussion instruments, some of which are constructed by Rick. They all sing as well. The band has over the years played shared venues with many prominent artist and has appeared on TV, radio, in movies, and theatre plays on numerous occasions. The fifth release from Song of the Lakes, Poets Say, is a testimony of the versatility of the band. Traditional sounds of the Celtic Isles and Scandinavia keeps the band rooted in it's own tradition. New sounds in new original songs takes the band into previously un-chartered territories resulting a mix of ballads, jigs, reels, chain gang song, almost country, and south American rhythms. With this project the band continues it's quest to spread joy to it's audience. This recording, with the band's creative song writing, musical arrangements, and strong delivery as cornerstones has brought the band to new heights. Recorded, mixed and mastered at Frontier Recordings in our home county it is a high quality product that does not compromise technical expectations of this day and age.

Here's what you say about
Song of the Lakes - Poets Say.