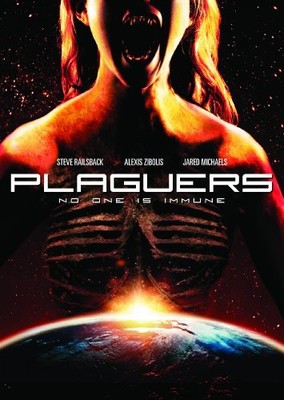 The year: 2241. The transport vessel Pandora hurtles through space, bringing an alien energy source known as "Thanatos" to fuel-starved planet Earth. The Pandora's six-person crew is headed by Captain Holoway, a tough, no-nonsense woman, recently promoted after the untimely death of former captain, and her fiancée, Rubini. Some of the crew is suspicious of Thanatos, which almost seems to have a life of it's own. A few thousand miles from Earth, the Pandora receives a distress signal from the Diana, a derelict spacecraft. Against the crew's wishes, Holloway decides to investigate. The ship first appears eerily vacant, until the surprise appearance of four beautiful women, all nurses on their way to a new medical facility, the only survivors of a vicious pirate attack. It doesn't take long before the "nurses" reveal their true nature: They are the space pirates, and they immediately begin taking over the Pandora, seducing and capturing the crew. In the melee, Thanatos is ruptured, spewing noxious green fluid all over one of the pirates. She begins to physically mutate, her features growing monstrous as she becomes a bloodthirsty PLAGUER! One by one, the Pandora crew and pirates fall victim to the virus, as they are attacked and then reborn as demonic, ravenous creatures. Meanwhile, Thanatos grows stronger and begins to control the ship, sending it on a dead-set voyage toward Earth. Time is running out, and the pirates and crew must reluctantly join forces if they are going to survive. The only way to stop the contagion is to destroy Thanatos - but how?

Here's what you say about
Plaguers.