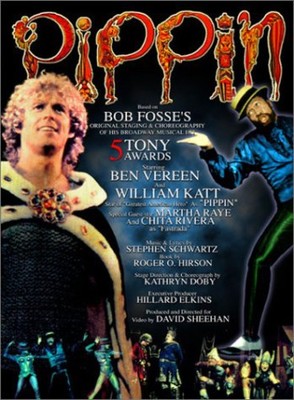 Pippin is a pip of a Broadway musical that is not only a contemporary classic but also the play that made director choreographer Bob Fosse a famous name long before "Cabaret" and "All That Jazz". Using the medieval legend of Charlemagne's son, Pippin, heir apparent to the Holy roman Empire, the musical pageant called "Pippin" is a parable about a young man's search for meaning and truth. With the show's masterful master of ceremonies, Ben Vereen, jumping the time barrier from the 1980's to the Middle Ages and back again, while the music and costumes go through similar time and space warps, young "Pippin" embarks on an odyssey to discovery whether there really is "something worthwhile I can do with my life." William Katt plays-sings-and-dances the title role with a freshness and exuberance rarely seen in today's entertainment on stage or screen. Broadway's virtuoso baritone, Ben Rayson, is as regal as they come as Charlemagne. The sheer intensity of Vereen's many-faceted talents steals the show again and again, but he never upstages his co-stars. Martha Raye brings her boisterous energy to the role of Berthe, Pippin's 67 year old grandmother, while Chita Rivera ignites sparks every time she prances into a scene as Pippin's stepmother. The success of "Pippin," wining five Tony Awards and playing to sellout houses for six years is also what brought recognition to it's star, Ben Vereen, long before his acclaimed portrayal of "Chicken George" in "Roots". with all of it's distinctions, "Pippin" has never existed anywhere but Live, on stage, until this videotape production, supervised by Mr. Fosse, and produced and directed for television by David Sheehan. It's the one video experience you'll always treasure! Hi-Fi Stereo, Produced in 1982.

Here's what you say about
Pippin.