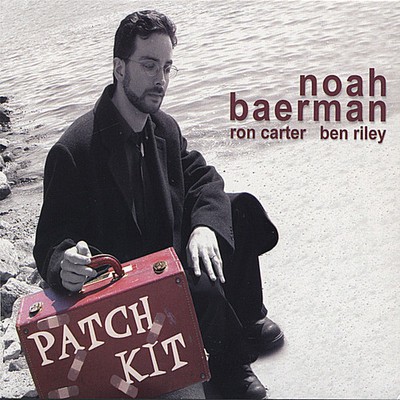 Noah Baerman makes a powerful statement with his trio album 'Patch Kit,' featuring the all-star rhythm section of bassist Ron Carter and drummer Ben Riley. It is not only passionate jazz from a soulful and mature young pianist, but also the transformation of a negative situation into a positive one. In the midst of his struggles with Ehlers-Danlos Syndrome (EDS), Noah produced Patch Kit as a way to raise awareness of this serious but little-known condition. Also, all of the proceeds go to the Ehlers-Danlos National Foundation (EDNF), an organization that provides information about EDS and support for people affected by it. Individuals with EDS are born with a defect in their connective tissue, the tissue which provides support to many body parts such as the skin, muscles and ligaments. While Noah was often injured throughout his youth, he was blissfully ignorant of how EDS would ultimately impact his career. In 1992 he entered Rutgers University, earning Bachelor's and Master's degrees in Jazz Studies under the tutelage of Kenny Barron. Wrist struggles were a constant, but he pushed forward, performing in and around New York with the quartet Positive Rhythmic Force (with whom he toured frequently and recorded two albums), Ralph Bowen, Wayne Escoffery, Charles Fambrough, Jimmy Greene, Stefon Harris, Tana Reid and Mark Turner. In his mid-20s, however, Noah began to fully realize the extent to which EDS would limit him. All of his joints were increasingly prone to injury and chronic pain, especially when subjected to frequent travel and performances. He was fortunate to have other options, teaching jazz at several universities and writing eight successful books for Alfred Publishing Company, including the recent Big Book of Jazz Piano Improvisation. Still, his 'tissue issues' were threatening his continued ability to perform at the highest level. But while the long-term outcome remains to be seen, we now have Patch Kit as a document of what he has accomplished so far. With two of his jazz idols, Noah works through a varied yet cohesive program. While EDS has already compromised his chops, no impairment is in evidence on up tempo romps like 'Carob Powder.' One could even surmise that his obstacles have deepened the emotional weight of his playing, as on the achingly lyrical 'Everything Happens to Me.' With the aid of informative liner notes, the album tells the story of Noah's journey, moving from songs of struggle to songs of hope. The emotional climax is a fresh take on 'We Shall Overcome,' a sentiment this album powerfully affirms. ** Selected press response to 'Patch Kit' ** Pianist Noah Baerman suffers from Ehlers-Danlos Syndrome, which affects the body's connective tissue. The only reason this is relative to Baerman's art is that he is consciously using 'Patch Kit' (Lemel) to draw attention to the underrecognized disease, and all proceeds from the album's sales will go to the Ehlers-Danlos National Foundation. Maybe the highest compliment that could be paid to this vibrant stylist is that his playing reveals not an iota of physical discomfort. Backed by the golden rhythm team of bassist Ron Carter and drummer Ben Riley, Baerman exhibits considerable technical ease and melodic aplomb in both his spirited improvisations and his original compositions. Broadminded in his tastes, Baerman takes full advantage of his supporting players, leading them through the charging bop of the 'Ko Ko'-inspired 'Carob Powder' and dueting with Carter on the free improv 'Where's Norm?' The album's high point may be a nine-minute arrangement of 'We Shall Overcome,' which kicks off with a remarkable Carter solo leading into a drama-filled Baerman statement that builds to a suitably stirring climax. - JazzTimes Fortunately, Baerman has the chops to more than hold his own with this estimable company. Much more than just a commendable exercise in education and humanitarianism, this is a wonderful and inspiring musical journey that's a testament to the power of jazz, humor and positive energy to turn a challenging situation into one of joy and hope. - All About Jazz EDS primarily affects the 30-year-old Baerman in his joints, which are more prone to injury . . . but his trio partners on Patch Kit proved inspiring. - Jazziz This one is quite good, . . . a disc of solid, imaginative, genially direct piano-trio jazz with plenty of heart. Pianist Noah Baerman has a most interesting style: the heavy touch of Brubeck (it's easy to see in yr mind's eye a close-up of the piano key going 'down' into the keyboard), some of the angularity of Monk, the humane earthiness of Horace Silver and the stylishness and technique of Kenny Barron ( whom Noah B studied under), and he plays in a very relaxed manner that is nonetheless active, engaging and harmonious. At times, his acoustic piano shimmers/decays with a tone that sounds like it's emerging an electric piano. NB has got the big C - conciseness; there's 10 tunes here, mostly originals, with no noodle, no doodle, no waxy yellow buildup. - Jazzreview.com Baerman, backed by legendary bassist Ron Carter and the understated yet brilliant drummer Ben Riley, has crafted a recording that accomplishes many goals including two very important ones. First of all, the money raised from the sale of the recording goes to help fund research into Ehlers-Danlos Syndrome, an as-of-yet incurable illness that causes a defect in the connective tissues of the body. Second, 'Patch Kit' illustrates how a musician can make a positive and uplifting work of art out of events in his life. - Hartford Courant.

Here's what you say about
Noah Baerman - Patch Kit.