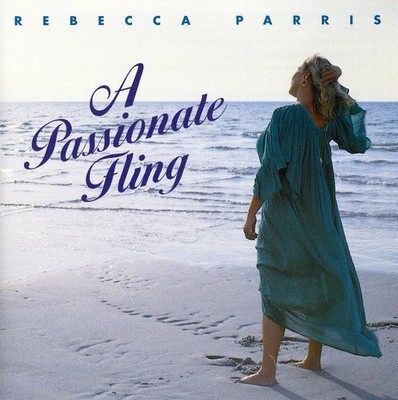 Every time Rebecca Parris has gone into the studio for one prominent label or another over the past four years, I've had a secret desire that she'd inveigle the producers into letting her re-record a few of the classic tracks from her earliest recordings. Without taking a poll, I know many of her other fans feel the same way. And for the same reason - to acquaint more ears with some of the great tunes that set her jazz career afire. Through her way with a song, they have become definitive versions. As in the case with so many artists in this genre we call jazz, these gems were locked away on LPs and cassette tapes in limited quantity, out of print - or worn out from repeated listenings - because they came from a self-produced, self financed session before CDs became the norm. The wait for the first phase of that material on CD is over. Parris and her support team decided to reissue most of her early work on their own. This was her debut recording, a project that has long deserved a slot in the CD shelves with her better known 1990's sessions on the MusicMasters, GRP and Kedabr labels. A Passionate Fling was recorded in 1984, just as jazz cognoscenti in and around Boston were beginning to take note of her formidable way with a song. Within a year, she began a rapid climb into the first tier jazz singers in New England. She has owned the Best Jazz Vocalist category at the Boston Music Awards since New England's version of the Grammys began 10 years ago. And she has stretched her following to the jazz club and festival circuit from coast to coast - with key spotlight engagements in Monterey, at Saratoga, the Mediterranean and the S.S. Norway's prestigious and perennially sold-out Floating Jazz Festivals. Parris has been an entertainer since age 6, singing everything from show tunes in summer stock to hard rock, which thankfully, she abandoned in the early 1980's. In the intimate confines of a jazz room, she brings to the stage a way of touching each listener. Her songs usually touch every person there. If words and delivery alone don't reach someone at first, her eye contact and presence draw them into her most pleasant musical web. Half of the tunes on A Passionate Fling remain popular items in her chart book with good reason. Parris has grown as a singer and her interpretations have also evolved. Yet these premier versions hold up well. Particular standouts include Somewhere Over the Rainbow, Teach Me Tonight and her vocal treatments of Miles Davis' All Blues. Her version of the Harold Arlen-Yip Harberg movie soundtrack classic has none of the wistful melancholy of the Judy Garland original direct from Oz. Here it's a song of hope and promise that continues to glimmer with new facets every time she sings it. I consider her arrangement of Teach me Tonight the definitive one, with it's blend of power, playfulness and passion. Her soulful side, digging deeply into the jazz elements, bubble to the surface on All Blues, which change tremendously in every performance because of it's improvisational nature. The rest of the songs here, from jazz standards by Freddie Hubbard and Thelonious Monk to original material by Parris and /or co-producer Stand Ellis, are also a fine fit for her artistry and endless search for the right material. 'The lyrics have to mean something to me. If it hits some bottom tinge in my soul, then the lyric will work for me. It's just a feeling of such universality. A sense of communication between a musician and the people,' Parris said. 'You could die for it. I really would die for it.' Becky told me that 10 years ago - long before her collaborations with Gary Burton, the finest West Coast studio jazz musicians, the great songwriter Carroll Coates and numerous big bands. And the words still ring true today. Ken Franckling September 1996 (Ken Franckling, a winner of the ASCAP Deems Taylor Award, is a contributing writer and photographer for United Press International, Down Beat, Jazz Times, Swing Journal and other publications)

Here's what you say about
Rebecca Parris - Passionate Fling.