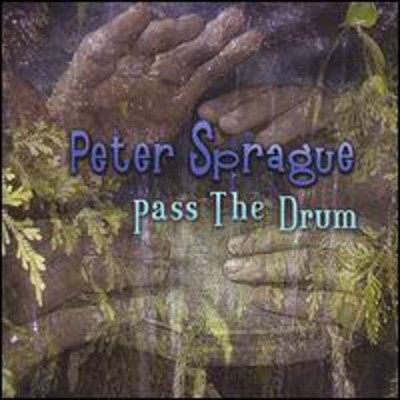 'From way back when I was a kid, the music of Brazil had a pull on me. Stan Getz and Joao Gilberto filled a good portion of the air in our house and ever since then I've been listening and learning from Brazil's many incredible musicians. The way they bend the rules both harmonically and melodically and then spin this whole creation over an infectious groove makes perfect sense to me. Here's hoping that it makes sense to you too'... Peter Sprague - guitar Best Jazz Musician of the Year 2002 - San Diego Reader Best Jazz Musician of the Year 2000 - San Diego Music Awards 'Peter Sprague is a jazz guitarist with mind-blowing instincts and a heart breakingly deft touch'-Jazz Times The name of the CD and the band is Pass the Drum. We are a seven piece group featuring Peter Sprague on the guitar; Tripp Sprague on saxophone, flute, and percussion; Ken Dow on bass; Duncan Moore on drums; Tom Aros on percussion; and vocals by Coral MacFarland Thuet and Leonard Patton. The name of our group evolved from an incident at Ki's Restaurant back in 1999. We were getting ready to start the gig and rather than begin with the whole band playing all at once, we instead ventured off into a tan tan drum solo in which the drum was passed around to all members of the group. It was an invocation on what was to follow - music with a percussive core, an exploration into the magic and influence of Brazil, passing the drum and sharing the spirit of sound. The band grew from our love of Brazilian music, jazz, and elements of American pop music. As a young fellow I was absorbed in the music of Joao Gilberto and Stan Getz and from there discovered Djavan, Sergio Mendes, Caetano Veloso, and Ivan Lins among many others. Since the early days I've had different groupings of folks who had this same pull towards the samba. Earlier groups included vocalists Kevyn Lettau and Kleber Jorge, bassist John Leftwich, and horn players James Zollar and Lori Bell. When we first started Pass The Drum, we played primarily all Brazilian music and then over time, slowly added other stylistic elements to our repertoire. One of our prime goals now is to bring fresh treatments to each song and to explore the World of Opposites. For example, we play a Jobim bossa nova in the style of John Coltrane, a Beatles tune set into a bossa nova/Pat Metheny groove, and a Bob Marley reggae hit morphed into a burning straight-ahead modal movement. We also set out to retain the jazz element of improvisation within the band and to let each player's solo abilities shine. When it's all working, the group has the looseness of a small group blended with the sonic color of a larger ensemble. Peter Sprague - guitar He has performed with Chick Corea, Hubert Laws, David Benoit, Charlie Haden, Sergio Mendes, and many others. Sprague has recorded fifteen albums under his own name and has lent his talents to over 120 other recordings, including the recent 'Sombra' on the SBE Record label. Peter also is involved with producing many other artists. He runs a recording studio called SpragueLand and this is where you'll find him leading the role of producer, engineer, guitar player, and arranger. In May, 2002 Peter composed and recorded the soundscore for a KPBS-TV documentary on artist James Hubbell entitled 'Eye of the Beholder.' It has been produced into a DVD. In May 2002, Peter composed a twenty minute guitar concerto and performed it with the San Diego Symphony Orchestra. This was a big deal! Produced by Peter Sprague Recorded at SpragueLand Studios, Encinitas, CA / March and April, 2003 Recorded, Mixed, and Mastered by Peter Sprague at SpragueLand Studios Photos, art direction, and design by Barbara Rix.

Here's what you say about
Peter Sprague - Pass the Drum.