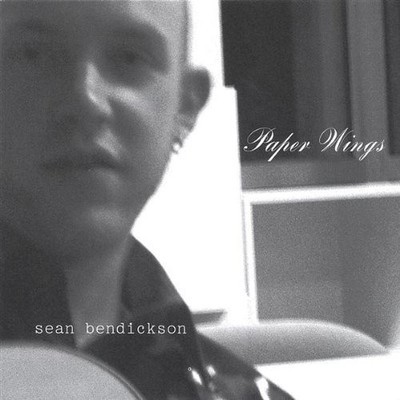 Sean Bendickson, a Missoula, Montana native, has spent the past 8 years in the Puget Sound area making a name for himself as a songwriter/performing artist. His songwriting draws from the influences of traditional country, classic rock, indie and folk. His unique sound is a package of well-strummed acoustic guitar, husky vocal stylings and earnest lyrics. With catchy melodies and heart-felt presentation, Sean's live performances effectively transcend many other singer-songwriters, simply by being more honest. Sean's original tunes have appeared on the albums he recorded with his brothers: Are We There Yet, and Ordinary Day. Recently, however, his first independently produced solo debut, Paper Wings, has allowed him to create a sound, and a following, all his own. Themes of unrequited love, spiritual searching and self-discovery run throughout the album in a blend of solidly-strummed and subtly finger-picked anthems. "I never really think about the themes of my songs," remarks Sean about the new album. "They're usually just about whatever is on my mind. I was getting over a relationship while I was writing most of these, and so that definitely colored most of it. But my grandfather had recently died. I had just graduated from college. I had some questions about God. That's all in there, too." He often performs solo, but occasionally works with a 3-piece backing band as well. Since he started performing in the area, he has appeared at the Tractor Tavern, the Conor Byrne Pub, Madison's Café and the Experience Music Project's Liquid Lounge in Seattle, and Jazzbones in Tacoma, to name a few. He has shared the stage with several notable artists, including Coco Montoya, Edie Carey, Michael O'Neill, Jonathan Kingham, Dan Bern, Eddie Spaghetti and Glen Phillips.

Here's what you say about
Sean Bendickson - Paper Wings.