Sawyer Fredericks - Out My Window 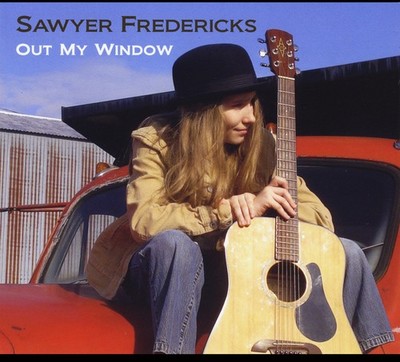 Sawyer Fredericks is a talented 14-year-old singer-songwriter, originally from Newtown, CT, now living on his family's farm in the town of Glen, in Upstate New York. A prolific songwriter, with more than 30 original songs, he is very proud to release his first full-length album, titled "Out My Window." Sawyer's music has a growing world-wide internet following and has appeared on an independent music chart in the UK, while Sawyer has been working hard at honing his performance skills at local Open Mic Nights, charity events, and professional gigs. His songs are written and performed with a sensitivity and storytelling ability far beyond his years, winning him an audience of all ages. Older fans often say he reminds them of acoustic artists and songwriters from the 60's and 70's, such as Bob Dylan and Joni Mitchell. Among his many musical influences are Ray LaMontagne, Johnny Cash, and Creedence Clearwater Revival. Here are some comments from fans: "I have been following Sawyer's videos for about 3 years now and I have to say it has been amazing watching him grow from a cute, little boy with a good voice to a very talented young man with a voice that could be award winning and a way of writing lyrics that no one else can compare to." ~Tiffany Marsh, Seymour, CT About "Not My Girl": "Another CLASSIC SAWYER SONG!! An Old Soul, as I've said about a million times lol. It's just such an awesome experience to listen, as he guides you through the song and makes you FEEL it. Lovin' it!" ~Tim Blaisdell, Mason City, Iowa 'He is an artist. That is all. That is what stands out for me when I listen to his songs, not just a singer, not just a songwriter, but a true artist, with more talent than I've ever seen from anyone this age. In a world of screaming-little-girl-driven mediocre teenage music, you are a beacon of light and a source of hope for the future of music as a form of art." ~Francois Marais, Western Cape Province, South Africa.

Here's what you say about
Sawyer Fredericks - Out My Window.