Carmen Rizzo - Ornament of An Imposter 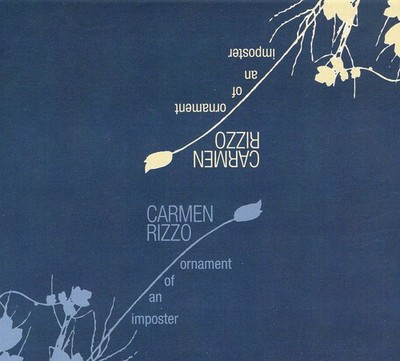 Two-time GRAMMY Nominee and underground darling Carmen Rizzo just released his sophomore album Ornament Of An Imposter on his own label, Electrofone Music. KCRW featured Carmen on their billboards and bus posters ad campaign solidifying their commitment to Carmen's critically acclaimed works. In Carmen's words, "KCRW has been such a huge part of my life, not only as a recording artist but as a listener. It really is my main source of music, news and information. Los Angeles and the world gains a lot from KCRW." After the success of Carmen's first release The Lost Art Of The Idle Moment (The Lab/Universal) debuting No. 2 on XM's Café Chart, No. 2 on KCRW's Album Chart, heavy rotation on Sirius's Chill Channel, and USA Today's No. 1 pick for The Life Section fall music guide, featuring Esthero, Jem, Grant Lee Phillips, and Kate Havnevick with the single "Travel In Time" used in many Film/TV syncs including The O.C. - Carmen decided to continue with his distinctive sound for Ornament Of An Imposter bringing in Jem and Kate Havnevik who give their beautiful vocal contributions to tracks such as "Ecouter" and "Sirens." Currently available on most digital outlets i.e.: iTunes, Amazon, Napster, Rhapsody with physical CD sales TBA. Carmen is a frequent fixture in album credits as a producer, mixer, remixer, musician, and co-writer for a wide range of influential artists including Seal, Coldplay, Alanis Morissette, Paul Oakenfold, BT, Tiesto, Ryuichi Sakamoto, Cirque du Soleil, KD Lang, and Pete Townshend of The Who, to mention only a few. He has also made records with a slew of notable producers, including Trevor Horn, Marius de Vries David Foster, Rob Cavallo, and Don Was. Carmen recently composed the score of his first film, 'The Power of the Game', from acclaimed British director Michael Apted. Carmen also co-founded the highly influential group Niyaz (Six Degrees) with Azam Ali & Loga Ramin Torkian. "...a world beat/electronic fusion, blending Indian & Persian exoticism and beats that are state of the art...", writes Billboard Magazine. The album released in 2005, debuted at No. 1 on the iTunes world music chart and has also been featured on NPR's "Day to Day", PRI & Voice of America. The band has toured the entire world, headlining in 10 countries including India, Japan, Turkey, Canada, Mexico, and throughout Europe. Keep an eye out for the new Niyaz, "Nine Heavens", in June 2008.

Here's what you say about
Carmen Rizzo - Ornament of An Imposter.