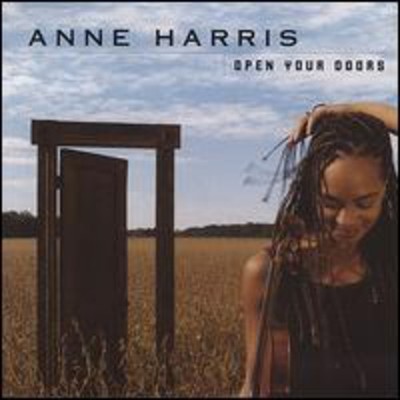 The same words keep coming up. Energy. Spirit. Vibe. Fans describing Anne Harris' performances often speak as much about what they feel as what they hear or see. Something's being delivered that transcends the physical senses and resonates inside the listener. If that's so, it's consistent with Anne's philosophy. 'Music is a mysterious energy,' she says. 'It has the power to effect change. With positive intent, it can raise our vibrations, stir emotions, heal us. I have a real reverence for the power of music.' But apparently it's not the kind of reverence that would keep Anne from having fun with it. Watching her perform, one can clearly see and feel how much she loves what she does. Her passion is evident as she continuously moves and shimmers with the sounds she and her band are creating. Anne is an artist with 'a personal vision,' WXRT Chicago DJ Richard Milne, recently observed. And it is this unique vision of a dynamic musical river, fed by streams of sounds drawing from Celtic, Americana, African, and even Middle-Eastern influences, that colors her waters. 'I think, as an artist, what drives one to create is the desire to make manifest those inspirations that whisper in your ear. My inspirations come from a wide range of musical traditions.' Growing up in a small college town in southwestern Ohio, Anne studied classical violin while her parents' broad record collection schooled her in a vast array of genres. After graduating from the University of Michigan's School of Music, she moved to Chicago and began to explore it's vibrant music scene, performing and/or recording with many notable artists, including Poi Dog Pondering, Michael McDermott, The Juleps, Hello Dave and Ramsey Lewis. She also began realizing her personal musical vision by writing and performing her own songs. 'Songwriting,' says Anne, 'is an intensely personal experience, but in the end I find I often have a very detached, impersonal relationship to the song itself. Art happens. Like a garden, we don't so much create art, as we facilitate it; we allow the opening, the possibility. Once released to the world, a piece of art will redefine itself with every person who experiences it. As a musician and a writer, my goal and challenge is to surrender, to try to allow songs to come through me without judgment, to stay open and fluid, to ride the waves. I am often asked what a certain song is about and I honestly don't always know. Sometimes the meaning changes for me over time. The song re-writes itself, so to speak.' With her sound emerging as an earthy, organic blend of genre-bending folk-pop, Anne's eponymous debut, released in 2001 on her indie label, Rugged Road Records, was enthusiastically embraced by fans and critics alike. On her latest release, Open Your Doors, Anne picks up where she left off with a stellar collection of songs that weave their way through varied musical terrain, their stories carried by her soulful voice and lilting fiddle. Masterful layers of rhythm, percussion and interpretive guitar work provide the common thread for this beautiful tapestry. In anticipation of it's release, Chicago magazine wrote, 'Fiery fiddler Anne Harris is a free spirit... [On Open Your Doors] her soulful voice continues to assert a world of influences, from Celtic to African to American folk/rock. Catch one of her live shows...' Like many artists, Anne frequently lends her talent for the benefit of chosen organizations. In addition, she has pledged a portion of the proceeds of each CD for charitable donation. 'I feel so fortunate in so many ways and I have always made sure to give back from day one,' says Anne. 'My prayer is that I can contribute in some way to fostering a climate of hope and healing. This is a very exciting and challenging time to be living and there seems to be so much potential, and so much at stake. I believe that our most beautiful moments as a human race are waiting to be born and we are all the parents of this new possibility.' 'Music is a mysterious energy. It has the power to effect change.' Anne's fans say they feel it. We can hope that the rest of the world will, too. In the meantime Anne will be writing songs and making music and just trying to do her part. Even if it doesn't change the world, she loves music far too much to do anything else. 'Hope's a dove on the wings of Love with a song to sing' Searching - Anne Harris.

Here's what you say about
Anne Harris - Open Your Doors.