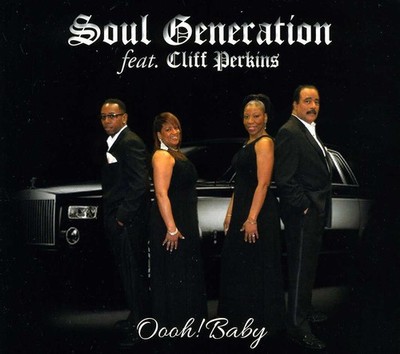 The Soul Generation feat Cliff Perkins is the perfect blend of soulful and sensous R&B MUSIC PAST,PRESENT AND FUTURE. Soul Generation feat Cliff Perkins today is a vibrant, productive contributor to the world of music,consistenly working their magic,captivating their fans and bringing new ones into the fold. What you'll find with the current version of Soul Generation feat Cliff Perkins is the smooth mellow R&B they have been celebrated for seasoned with a little female flavor. A combination that definitely spells w-i-n-n-e-r ! The groups new sound combined with the new look has them ready,willing and able to mesmerize a whole new generation. The new Soul Generation feat Cliff Perkins consist of seasoned professional Cliff Perkins 1st & 2 nd tenor and lead singer has a rich and diverse musical history. His talents span the musical scale (no pun intended) encompassing such titles as songwriter,producer,arranger and choreographer. Amongst his many achievements are also the titles of Model, Actor,and Entrepreneur.With a strong aptitude for business. Six of the songs on the CD were written by Cliff Perkins and he is the lead voice on six of the songs on the new CD including the title song Oooh! Baby . At Cliff's side is a shimmer of femininity in the form of Ms Veda LaRue .Veda is an amazing, multiatalented lady. She has a lusty soprano voice that's always delivered with sultry,sparkling sophistication. Some of the songs on the Oooh! Baby CD are performed by Veda,Your Way, andShow your love, which shows her versitility and power of her vocal ability, plus a lot of riffs and soprano notes through out the CD. She has performed along side the best that R&B world has to offer,offering them her steamy,sultry,soulful style. Her talent is genuine,rich and she's ready to show the world just what she can do. The newest addition to the group is Donald Taylor. Donald is polished,consummate professional with an eye on the bright future that awaits him. Donald is a natural second tenor with great lead quilities as you will hear from his leads on Nice & Slow, My love is real,and In your way 2013 from the new CD titled Oooh! Baby. Truly a wonderful addition Donald Taylor fits right into the Soul Generation grove and is ready,willing and able to help this new verison of Soul Generation take on the new millenniun. Completeing The Soul Generation feat Cliff Perkins is Cliff' daughter Crystal Perkins. She grew up listening to the group practice day in day out striving for perfrction. As she grew up she had a love for the arts right into her adult life where she began singing in local establishments whenever she could.Crystal started singing in Church also perecting her craft. She showed an interest in Soul Generation and there was an opening in the group so her father decided to give her a chance. It proved to be a good decision for both Crystal and Soul Generation.Crystal carries the low note on three of the songs on the new CD, Music to my ears,Yesterday's Memories,In your way2013. It's a winning combination. To book Soul Generation feat Cliff Perkins call ITP Management at 201-792-2658. Thanks for buying our CD!!!

Here's what you say about
Soul Generation - Oooh Baby.