Natalia Zukerman - Only One 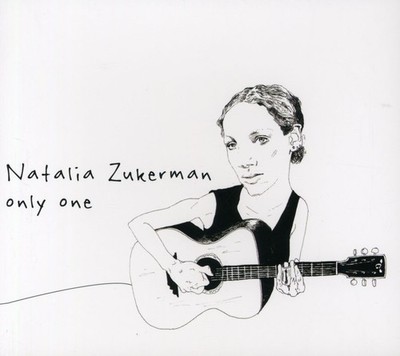 Her songs display "the come-hither sultriness of her slinky, earthy vocals." (Performing Songwriter) Natalia Zukerman has a sound that's strong yet delicate, gentle yet insistent. You can call the music she makes folk if you want, but there's jazz in it, too, and blues, and a soulful something or other that you can't quite put into words. Whether onstage or on record, she presents herself just as she is-no gimmicks, no flashy pyrotechnics, only the solid musicianship of someone who knows and loves her craft. The daughter of violinist/conductor Pinchas Zukerman and flutist/writer Eugenia Zukerman, Natalia grew up in Manhattan immersed in classical music. Performing live-and experiencing what she calls the life of a "wandering gypsy"-seems to be a family tradition: her sister Arianna is an opera singer, and her paternal grandfather played clarinet in Klezmer bands in Poland and later Israel. But after receiving the requisite training early on, Natalia realized her first instrument-the violin-was not taking her where she really wanted to go. "I couldn't match what I heard (in my ears), physically," she recalls. "The sound I produced drove me out of my mind." Nor did she feel at home in the world of classical concerts and recitals: "I didn't like getting dressed up and sitting in silence, rehearsing and playing the same piece the same way, over and over again," she says. There were glimpses now and then of an alternative. "My parents used to go to the Aspen Music Festival in the summer when I was very young. One day I saw someone-I think it was the classical violinist Nigel Kennedy-playing fiddle in a bluegrass band, and heard banjos for the first time..." Zukerman laughs as she thinks back on that 'aha' moment, joking that "I felt like I'd been lied to!" Once her eyes opened to the folk scene, everything began to change. She turned her attention to the guitar-beginning with classical lessons-and began writing songs of her own after graduating from college. The lyrics she came up with-which have often been hailed for their imagery and intelligence-are intensely personal, without the self-obsessed confessional tone of what she nicknames "diary rock." And her love for the guitar has led her to explore more and more varieties and offshoots of the instrument: electric, acoustic, slide, lap steel, even the banjo and a brief foray into traditional Indian technique. "Nimble fingers capable of picking upward of thirty notes per measure," says a music writer for the New Yorker, offering further praise that "when she sings she can switch from scat to swoon in the course of a glissando.' Her debut recording, Mortal Child (2001), provided an early glimpse at her talents. Things really fell into place on her second album, On a Clear Day (2003), which showcased her evolution as a guitarist. For that one, Zukerman gathered a veritable Who's Who of respected players from the acoustic music community to join her in the studio, including percussionist Allison Miller (Natalie Merchant), multi-instrumentalist Julie Wolf (Ani DiFranco, Dar Williams), and bassist Jason Kriveloff (Topaz, Tortured Soul), among others. One listen to the instrumentation on the recording-with it's touches of cello, banjo, flugelhorn, accordion, and flute-and you can tell Zukerman knows exactly how to create richly textured, atmospheric settings for her intimate songs. 2006 brings a third album, Only One, and a very different approach. "People have been asking if I have a recording that's more representative of what I do live," she says. Those requests, along with her desire to create an intimate, unpolished, and almost-live sound, inspired her to record at home, creating an album on which she plays the songs as written: for guitar, for Dobro, and for her voice. As for those live shows, they've been growing more and more frequent as word of Natalia has traveled along the acoustic circuit. She's sensational no matter where she plays; a house concert, an audience of a hundred, or in front of the thousands at gatherings like Telluride, the Rocky Mountain Folk Festival, and Ottawa Folk Fest. Recent tours as the guitarist for Andy Friedman and the Other Failures, as well as sharing the stage numerous times with Melissa Ferrick, have won her countless new fans as well. When she's not playing music, Zukerman can be found running her own label, Talisman Records, or painting bigger-than-life murals commissioned for public or private spaces. Onstage, however, is where she's most at home. As Friedman notes, "Her bright vocals can send an orchid into bloom, while her delta-slide guitar can open a beer bottle with it's teeth." One thing's for certain: this girl can play.

Here's what you say about
Natalia Zukerman - Only One.