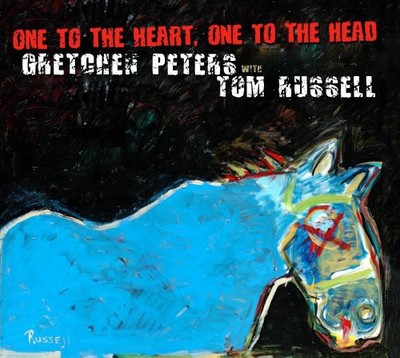 The record also includes Russell's version of his "Who's Gonna Build Your Wall?", winner of the 2008 Folk Alliance Song of the Year. Tom Russell has recorded 25 records and one DVD. His songs have been recorded by Johnny Cash, Doug Sahm, Nanci Griffith, Joe Ely, Iris Dement, Ian Tyson, KD Lang, Suzy Bogguss, Ramblin' Jack Elliott, Jerry Jeff Walker, Dave Van Ronk and other great artists. Russell is credited, along with Dave Alvin, with inventing the Americana radio format with their Merle Haggard tribute Tulare Dust in 1994. 'Two talented songwriters lay their pens down for a cover album that's one of the best folk records in recent memory.' - PopMatters. 'Peters is an intuitive singer whose lovely voice projects warmth and sincerity. Russell is her deep-toned counterpart. Together, they convey the truths of each lyric with subtle artistry. Peters and Russell have crafted an album as interesting as it is entertaining - an early candidate for album of the year.' - Raleigh, NC News & Observer 'Unusually for Peters every track is a cover, but her choices are impeccable. The pick of them is "If I Had A Gun", a song powerful in any hands but here the listener is given a bit of a shock by having her hauntingly beautiful and rich voice sing the bleak and nihilistically violent lyrics. Not far behind is the duet on Bob Dylan's "Billy 4" from his 'Pat Garrett and Billy the Kid' soundtrack, where Russell provides bitter granite vocals while Peters sings with gumption and conviction. That said, there really isn't a weak track on the album... Peters' performances are a career high, and Russell continues his astonishing late run of success on what is, quite simply, as good an album as you'll hear all year.' - Americana UK.

Here's what you say about
Gretchen Peters - One to Heart One to Head.