Up All Night: Live Tour 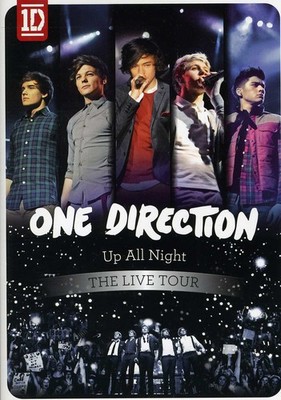 They've sold over 4.2 million records worldwide in just six months, have accumulated 204 million views on YouTube, 12 million followers on Twitter and 4 million followers on Facebook, had two No.1 selling books, and scored three major hit singles and a platinum selling debut album in the UK. Now, having completed their first sell out tour of the UK, Harry, Niall, Zayn, Liam and Louis are releasing their first tour DVD. Featuring a 73 minute concert filmed in January this year, the dynamic performance boasts all the band's hits, tracks from their debut album 'Up All Night', some of their favourite covers - plus a few surprises. Extras come in the form of an exclusive, behind the scenes documentary following the UK's most exciting new pop band throughout their UK tour, as well as the videos for 'What Makes You Beautiful, 'Gotta Be You' and 'One Thing'. One Direction's global smash debut album, 'Up All Night', entered the charts at No.1 in 13 countries and has been certified triple platinum in Ireland, double platinum in the UK & Australia, and platinum in New Zealand. Their 2013 UK/Ireland Arena Tour sold out immediately with more dates needing to be added. An estimated 300,000 tickets were sold in the first day. One Direction's tour of Australia & New Zealand sold out in just three minutes. The band recently made history in the USA as the first British group ever to debut at No.1 in the US with their debut album release. Over 10,000 fans turned out for the band's first live TV performance on NBC's Today Show in Rockefeller Plaza, New York and record numbers of fans have turned out to see them at album signings in the US. The band performed their hit single "What Makes You Beautiful" on the Nickelodeon Kids Choice Awards on March 31st, and will appear in an episode of iCarly "iGo One Direction" set to premiere April 7th on Nickelodeon. The band will also be the musical guests on Saturday Night Live on April 7th with guest host Sofia Vergara.

Here's what you say about
Up All Night: Live Tour.