Ross Vick - One By One 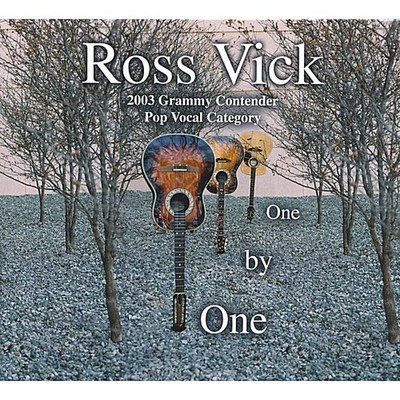 Biography Ross Vick Times Three/TrueHeart Sibling harmony, not rivalry, emerges as the constant in TrueHeart for the trio's tight blend at the mic mirrors close-knit family ties offstage. Never a cover band, TrueHeart enjoys strong audience response to it's originals, all written by Ross Vick alone or in collaboration with his sister Karen Vick Cavazos, and brother Patrick Vick. Three of this year's (2004) Grammy acknowledgements are reflected in the best pop vocal performance by a duo group. The band's story began in 1979, when Ross (lead vocals and guitar) enrolled as a freshman at the University of Texas-Austin. Working with guitarist and songwriter Rick Isbell (touring guitarst for Charlie Pride) they joined with sister Karen (vocals) already lived in Austin, and, together with other musicians, she and Ross began performing professionally. Eighteen months later, while still in his late teens, Ross left school to seek fame as a songwriter in Nashville and Los Angeles. Joining with Brian Cadd, Austrialian singer/songwriter/producer they shopped several projects to the labels in L.A.. After knocking on doors for two years, Ross returned home, married a childhood classmate, and reorganized the band. Younger brother Pat, then a high school senior, added his talents on vocal and percussion to the group, which performed under the name E-Heart Land and Cattle Company (taken from an old family cattle brand). Armed with $10,000 in new recording equipment, Ross engineered sessions for the band in a bedroom cum studio in his house. Early projects also included an album for the Texas Folklore Society, Singin' Texas (publication) and backgrounds for a soundtrack narrated by Bill Moyers and produced by screenwriter Ann Hackney (Carrie). Their new material was sucessfully pitched to former Swan Song president Mitchell Fox, with whom the Vicks are close friends of to this day. E-Heart continued performing in venues ranging from corporate events to repeat appearances at the Texas Folklife Festival in San Antonio, and Ross continued sharpening his compositional skills. The American Song Festival soon recognized both his writing and that of his brother, Pat. By now a father, Ross began working in the family business in Dallas. Music monopolized his thoughts, but breadwinner demands dominated his days, and the group finally disbanded, entering what would become an almost 20-year hiatus. During this time, Pat earned a bachelor of arts degree in history at St. Edwards University in Austin, married, and joined the family business. Karen, a self-described musical soulmate of Ross, married, reared two children, and enrolled in Texas A&M University-Commerce, where she earned bachelor's and master's degrees, with double majors in earth science and history. Ross also returned to school and received a bachelor's degree in advertising from Southern Methodist University. The events of 9/11 and a family crisis in 2002, however, motivated Ross to reconsider his priorities. He began listening to his heart, left the family business and rejuvenated his passion for writing, performing and recording. With the urging of his musician friends, Ross promptly went into the studio and recorded One by One, a collection of original songs from the E-Heart days. Pat and Karen showed up for a casual recording studio party and were also bitten by the bug. The ball was rolling. Although Grammy Award-winning engineer Phil York did not know the Vicks and had not participated in the project, upon hearing the disc, he was so impressed by both the songwriting and performance quality that he submitted One by One to the National Academy of Recording Arts & Sciences for consideration. One by One was named a contender for a 2003 Grammy Award in the Best Pop Vocal category. As a result of this serendipitous association, York was asked to lend his considerable expertise to this recording of What is Mine. This CD is a recipient of nine Grammy acknowledgements in six different categories including Best New Artist. Today, the Vick siblings' sound is solid, and the blend, richer than ever. They wrapped up 2004 by opening for the Beach Boys at the Dallas Make A Wish Christmas Celebration. Ross Vick and TrueHeart is surrounded with capable Dallas musicians, including former E-Heart members Sam Swank (a student of Andres Segovia and touring guitarist for Olivia Newton John; Blind Lemon Blues) and drummer Jeff Howe (Johnny Reno and Max Stalling); and new friends Rosana Eckert assisting with vocals, Sean McCurley (drummer with LeeAnn Rimes) and James Driscoll (bassist with Chomsky) and Guitarist/writer/producer Aaron Kelley. Melodies and lyrics on these recording are comfortable, listenable, and refreshingly singable. The musicianship renders double takes. Songs on One by One and What Is Mine are guaranteed to linger in the listeners mind-and soul-long after the disc stops playing. And even better, the best is yet to come!

Here's what you say about
Ross Vick - One By One.