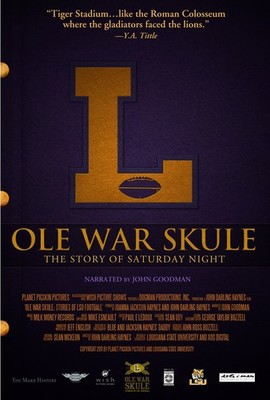 Narrated by Golden Globe and Emmy Award winning actor John Goodman, Ole War Skule: The Story of Saturday Night will dynamically illustrate the unique and rich history of the LSU football team, the fans, the players, the coaches and all of the peripheral support teams and partners who work together to create the incredible experience known only as LSU football. Unlike any other LSU football film, this film tells a comprehensive story from 1893 to present day of what really goes into creating Saturday Night at Tiger Stadium. The movie includes over 75 unique interviews from LSU coaches, Golden Band members, cheerleaders, football staff, coach's wives, and Tiger football greats such as Y.A. Tittle, Billy Cannon, Bert Jones, Jerry Stovall, Coach Miles, Coach Saban, Glen Dorsey, and many others. The film also includes different behind the scenes "mini documentaries" such as how the BCS National Championship trophies are made in Waterford, Ireland, how the National Championship rings are made by Balfour in Austin, Texas, how the field in Tiger Stadium is maintained and prepared for every game, in addition to many others. This cinematic feature length documentary isn't only about individual plays, hall of fame players, or particular games in the programs history. Instead this story tells the roots, brotherhood, and the development of many individuals that molded the program into what makes LSU football so special today.

Here's what you say about
History of Lsu Football.