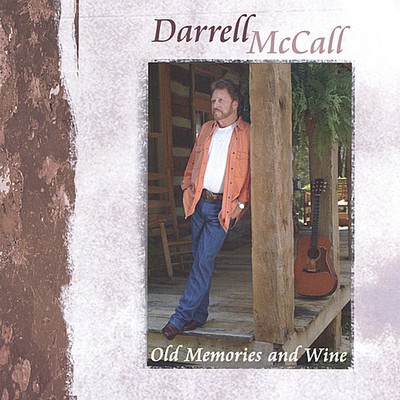 'This is the album that I have been wanting to record for a long time,' Darrell McCall said. 'I have always wanted to do a project with the songs that I wanted to record-the way that I wanted to record them. Justin Trevino and Heart of Texas Records gave me that opportunity. I am so very proud of 'Old Memories and Wine'.' 'Old Memories and Wine' is Darrell McCall's first album in nearly ten years. The project was recorded in Texas and features some of the finest musicians including Grammy Award Winning Floyd Domino on keyboard, Dixie Hankins on drums, Bobby Flores on fiddle, Levi Mullen on Lead Guitar and Tic Tac guitar, Dickie Overby and Rick Price on Steel Guitar and Justin Trevino on bass. Justin also produced 'Ole Memories and Wine.' Darrell honored some of his old bossmen by recording the Carl Smith standard 'I Feel Like Crying' and the Faron Young classic 'I Miss You Already.' His vocal really ability shines on Jimmy Dickens' 'When Your House Is Not A Home.' Darrell features some special 'thumb picking' with Merle Travis' standard 'Divorce Me C.O.D.' Travis was an early influence on Darrell. 'One of the first songs that I remember is Ernest Tubb's 'Answer the Phone'' Darrell said. 'I remember gathering water from the pump in the back of the house while singing that song. It was one of my favorites. I always wanted to record it.' 'Old Memories and Wine' is also highlighted by some never before recorded songs including the shuffle anthem 'April First' 'May Time My Lady' and 'On This Mountaintop.' 'I have always enjoyed singing the old Civil War song 'Mary Dear',' Darrell said. 'It really holds a special meaning with the current world situation that we are facing now.' Darrell included his family as a part of 'Old Memories and Wine.' His daughter Guyanne McCall May contributed the title track and his wife Mona wrote 'May Time My Lady.' Darrell's son Cody McCall added his harmony vocals to the entire project. Mona McCall also added two songs vocally to 'Old Memories and Wine' with the Harlan Howard composition 'The Deepening Snow' and the French Canadian standard 'The French Song.' 'I sing the 'Deepening Snow' and 'The French Song' on most of Darrell's shows,' Mona said. 'I had always wanted to record them, but I was not given the opportunity. I told Justin and he said 'let's just do it'. Justin makes you want to sing your best. He is my favorite producer.' Darrell McCall came to Nashville, out of Ohio in 1958 with Donnie Lytle, later known as Johnny Paycheck. Shortly after arriving, Darrell became a session harmony vocalist, working with artists such as George Jones, Carl Smith, Faron Young and Ray Price. As a member of Ray Price's Cherokee Cowboys, Darrell worked with future Country Music legends such as Johnny Paycheck, Johnny Bush, Willie Nelson, Roger Miller and Buddy Emmons. Later he also traveled with Faron Young and Hank Williams, Jr. Darrell was first introduced to the bass when a member of the Audrey Williams band was in a pinch for a bass player one night. Darrell had only played guitar; he had fooled around with an upright bass, but had no real experience playing bass. The only problem was - he didn't have a bass to play! So....as necessity becomes the mother of invention.....Darrell took the small strings off an old upright bass and fashioned them onto his guitar. Darrell obliged Audrey by giving it a try, and has been playing bass ever since; in fact, bass is his favorite instrument - he also plays fiddle, guitar, harmonica, and even twiddles on the drums a bit. It was then his bass playing and his ability to sing harmony that gave him his start in the bands of Ray Price and Faron Young. He is still known to 'steal the bass' from a band member during a show; he just enjoys playing it so much that he can't resist the urge!! Darrell has received many accolades during his musical career. He was recently inducted into the Country Music Association of Texas Hall of Fame. He performs at dance halls, concert halls and auditoriums, fairs and festivals and is a regular guest at the Grand Ole Opry and Ernest Tubb Midnight Jamboree in Nashville. 'I love this business so much,' Darrell said. 'It has given me so much. My fans and friends mean the world to me and I hope they like 'Old Memories and Wine' as much as I do.'

Here's what you say about
Darrell McCall - Old Memories & Wine.