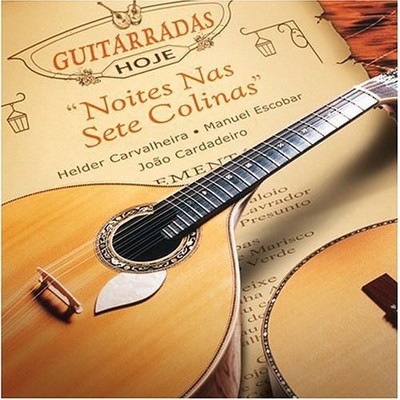 The Portuguese Fado is known worldwide as the 'Portuguese Blues', the deepest musical expression of the Portuguese people. Recordings of Fados as sung by 'Fadistas' are readily available. On the other hand, recordings of 'Guitarradas de Fado' (Fado Instrumentals) are not. Wherever live Fado shows are performed, one of the most anticipated portions of the show is the instrumental set, or the 'Guitarradas'. This is where the musicians sweat bullets to extract the fastest, most complex passages from their instruments, and contrast them with the sweetest, deepest expressions of their souls that stringed instruments can afford. These are peak experiences for Portuguese Fado musicians, and they have been deftly captured on the 'Noites nas Sete Colinas' CD (the title translates into 'Nights on the Seven Hills', referring to Lisbon, which is known as the City of Seven Hills). After many years of individually honing their musical skills, Helder Carvalheira, Manuel Escobar, and João Cardadeiro first made music together in early 2003. After just a few rehearsals, they played their first Noite de Fados on March 14, 2003. Many more Noites de Fado followed where they refined their collective musicianship and stage performance, as they continue to this day. In parallel with their live performances, Helder, Manuel, and João appeared as the primary Conjunto de Guitarras on the debut CDs by Jesualda Azevedo and Isalino dos Santos. Upon completing these projects, they embarked on the recording of 'Noites nas Sete Colinas', a collection of Guitarradas de Fado based upon classic Fados and Guitarradas by the Portuguese masters of this fine art form. Beyond simply re-recording classic fados, João Cardadeiro led the group through his all-new arrangements and compilations that grace the CD. The relaxed environment provided by Helder Carvalheira's recording studio, Meia Noite Estudios, allowed for the finest soulful performances to be captured for this project. However, it is more than simply the Fado that keeps the three musicians together. They have developed a true camaraderie and deep friendship that is conveyed with every performance and recording. After all, music is the expression of one's soul, and Fado is the most profound expression for a Portuguese musician. When the feelings in the Fado environment are deep and true, they are easy to convey to listeners, regardless of language or nationality. Fado. Guitarradas. The soul of Portugal. Come experience this with 'Noites nas Sete Colinas'.