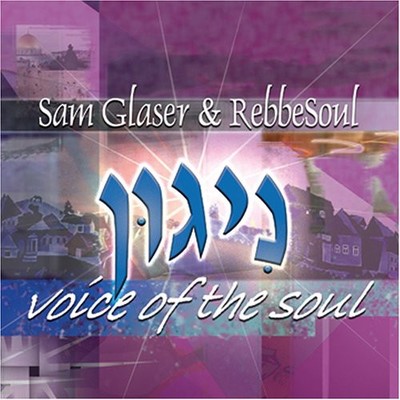 Recording artist Sam Glaser, a leading Los Angeles-based composer and performer of contemporary Jewish music, and RebbeSoul, popular Jewish rock/world-fusion guitarist have released an innovative new CD Nigun/Voice of the Soul. Friends since 1990, the two prolific musicians realized in 2004 that their enthusiasm for the traditional Jewish wordless song form (nigun) would make for a unique and joyous CD project. RebbeSoul says, "When Sam first mentioned these "nigunim" he had written over the years, I knew this was the project we were destined to do...there's nothing like a good collaboration to turn a dream into reality." This unusual album features nineteen infectious reggae-klezmer-worldbeat arrangements of Glaser's own melodies as well as classic Jewish cover tunes. Over two years in the making, Nigun/Voice of the Soul includes over seventy-four minutes of powerful arrangements produced and performed by Glaser and RebbeSoul with their newly formed ten-piece "Nigun Unlimited Orchestra." Both artists sing and play percussion, Glaser handles piano and keyboards and RebbeSoul plays just about anything with strings. It features vocal performances by members of such top Jewish acts as Moshav Band, Blue Fringe, Soul Farm, Gershon Veroba, Six13, B'samim, Kol Zimra and Beatachon. Glaser remarks, "creating a work of this scope requires countless hours in the studio...it was a joy to have a partner with the chops and innate talent of RebbeSoul, combined with his ability to make me laugh in any situation." Some early reviews: "An entirely new level of sophistication for Jewish music...and I get just about every CD that comes out. Voice of the Soul has incredible depth, is soul stirring and covers myriad emotional fronts. It is a rare album that can tear at your heart and then get you dancing." -Jewish Voice "Nigun is the best CD I've received in years. It has some of the best arrangements I have heard in this traditional "Jewish scat singing" form. -Phil Fink/Shalom America Radio "Sam's beautiful voice, Rebbe Soul's soulful style; two geniuses joined to create a unique piece of artistry, each of whom have successfully earned an audience of their own. Voice of the Soul is both a tool to meditate and celebrate...a brilliant achievement in Jewish music." -Mindy Chakov, S.W.I.S.H. Productions "I can't stop playing it! I already used five tracks on my daily klezmer/Jewish music program on WNWR and got great listener reaction. It's fresh, exciting, innovative, uplifting, exhilarating and is one of the best CD's I've gotten in a long time. It's a hit!" -Barry Reisman, Program Host, WNWR 1540.

Here's what you say about
Sam Glaser & Rebbesoul - Nigun-Voice of the Soul.