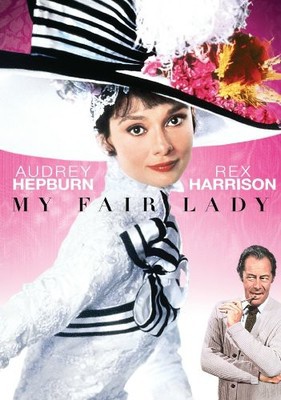 At one time the longest-running Broadway musical, My Fair Lady was adapted by Alan Jay Lerner and Frederick Loewe from the George Bernard Shaw comedy Pygmalion. Outside Covent Garden on a rainy evening in 1912, disheveled cockney flower girl Eliza Doolittle (Audrey Hepburn) meets linguistic expert Henry Higgins (Rex Harrison). After delivering a musical tirade against "verbal class distinction," Higgins tells his companion Colonel Pickering (Wilfred Hyde-White) that, within six months, he could transform Eliza into a proper lady, simply by teaching her proper English. The next morning, face and hands freshly scrubbed, Eliza presents herself on Higgins' doorstep, offering to pay him to teach her to be a lady. "It's almost irresistible," clucks Higgins. "She's so deliciously low. So horribly dirty." He turns his mission into a sporting proposition, making a bet with Pickering that he can accomplish his six-month miracle to turn Eliza into a lady. This is one of the all-time great movie musicals, featuring classic songs and the legendary performances of Harrison, repeating his stage role after Cary Grant wisely turned down the movie job, and Stanley Holloway as Eliza's dustman father. Julie Andrews originated the role of Eliza on Broadway but producer Jack Warner felt that Andrews, at the time unknown beyond Broadway, wasn't bankable; Hepburn's singing was dubbed by Marni Nixon, who also dubbed Natalie Wood in West Side Story (1961). Andrews instead made Mary Poppins, for which she was given the Best Actress Oscar, beating out Hepburn. The movie, however, won Best Picture, Best Director, Best Actor for Harrison, and five other Oscars, and it remains one of the all-time best movie musicals.

Here's what you say about
My Fair Lady.