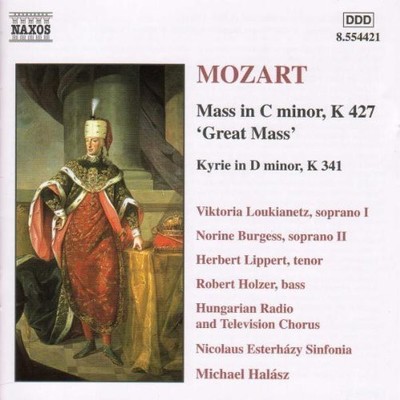 The Mass in C minor reflects Mozart's current preoccupation with the music of Handel and Johann Sebastian Bach, explored with the encouragement of Baron van Swieten, an important patron. The work is scored for pairs of oboes, bassoons, horns, trumpets and timpani, with three trombones, strings and organ continuo. After a brief orchestral introduction, the four vocal sections enter in contrapuntal imitation and the movement continues in the monumental and generally conservative style that the Salzburg Archbishop would certainly have discouraged. The soprano soloist introduces the florid Italianate Christe eleison and the contrapuntal choral texture is resumed with the return of the Kyrie. The Gloria opens in affirmative C major, leading almost at once to energetic fugal writing, relaxing momentarily at the words pax hominibus bonae voluntatis (peace to men of good will). Laudamus te is in F major, marked Allegro aperto. It is scored for solo soprano, oboes, horns and strings and is in operatic style. Trombones and bassoons return for the A minor Adagio of Gratias agimus tibi, now with a five-part choir. To this the D minor Domine Deus, Rex caelestis, scored for strings and two soprano soloists, offers an immediate contrast. In Salzburg the second soprano would presumably have been sung by one of the castrati employed by the court musical establishment. There is a return to a more traditional Baroque style in the solid dotted rhythms of the G minor Qui tollis peccata mundi, for two four-part choirs with the full orchestra. The two soprano soloists are joined by a solo tenor for the E minor setting of Quoniam tu solus Dominus, scored without trombones or horns. The solo voices enter in energetic contrapuntal imitation, over which the spirit of Handel seems to loom, seen through a Mozartian prism. There is a brief C major choral Adagio for the words Jesu Christe, before the splendid formal Baroque fugal setting of Cum Sancto Spiritu, in the same key. The unfinished Credo starts with a movement for five-part choir, scored without trombones.