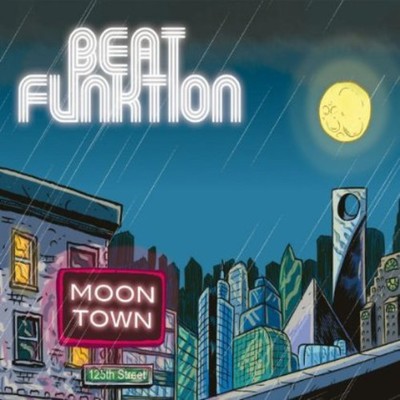 Vintage jazz-funk outfit Beat Funktion takes you back to the roaring 70s with their second presentation of floorfilling funk grooves, meaty bass riffs and fiery jazz solos: the concept album 'Moon Town', telling the dark tale of a fictitious sci-fi city oozing with criminality, suspenseful action, drizzling rain and surreal inhabitants. Original compositions are merged with fresh takes on select funk covers, and the band is joined by percolating percussion, vocal choruses and orchestral strings for their trademark powerhouse sound. The opener 'Kareem' (a tribute to one of America's top basketball legends?) paints a crepuscular cityscape soaked in drizzling rain, but quickly turns into a spectacular blast-off into groove territory where guitarist Johan Oijen's pulsating fingerwork forms the foundation for a true romp of good old funk. 'Women In Neon' is the album's longest track, a soft funk waltz that is a nod towards the smooth jazz vein of Bob James; it's long finale with sizzling guitar, panting voices, swirling strings and incessant funk bass is a highlight, giving this very smooth track a tougher edge than first impressions may reveal. Oliver Nelson's '125th Street And 7th Street' is a true forgotten blues gem, mainly built up of two chords throughout. The brass bursts of the bluesy main theme pave the way for Thunstrom's meaty tenor solo, and in turn Lantz' welcome contribution of a soulful Hammond B3 solo. 'City Lights' is something of an interlude on the album, as things quiet down and leave Lantz' acoustic grand playing a gentle atmospheric tune to the backdrop of soaring strings, appropriately conveying the nocturnal spirit of the album. 'Mastermind' then abruptly kickstarts a dark, underground crime theme, as Olandersson's muted trumpet and Thunstrom's sparkling sax take turns to tell the tale of crime lords, police chases and various shady parts of Moon Town that no one would like to walk alone. Thunstrom's original 'The Great Escape' is where the real action kicks in, and to thunderous bass and drums, we find ourselves racing through the streets of Moon Town, as Öijen's spirited electric guitar, Olandersson's fiery trumpet and Thunstrom's tasteful sax all offer the funky fuel. Lantz' upbeat title track 'Moon Town' is without question a tribute to funky TV series music of the 60s and 70s, with wailing brass and talkbox guitar carrying the singable main theme. Strings help to propel the action, providing the undercurrents to Lantz' sci-fi escapades on the Moog synth. As tenor sax and trumpet go in for a solo duel, the energy on this number is almost overwhelming, and proves to the listener that Moon Town without question is a place packed with action, danger and excitement. John Coltrane's classic 'Impressons' is turned into soulful funk by it's slow but persistent drum beat, and the theme, now reshaped to merge with the new arrangement, comes out punchier than Coltrane's original. Johnson's ruminating bass solo is a spirited flight into the magic skies of Moon Town, making it one of the most tranquil, yet intense tracks of the album. The final track 'Driver's Seat' kicks off with a car crash, then accelerates and speeds off into the distance, taking us away on a veritable funk rollercoaster. It's pumping bass guitar riff continues throughout the song, while the powerful theme melody is presented by Rhodes, brass and angelic choirs. Oijen's remarkable guitar solo is a genuine highlight, before Olandersson delivers some powerhouse trumpet playing. As the song nears the end, it slows down, fades away, turns into mist, as the rain keeps pouring down in Moon Town. As evidenced by their debut album 'The Plunge', Beat Funktion is 'one of the most tirelessly energetic bands in the world' - as one US-based reviewer stated - and on their second album, they keep delivering the same energy, quality and imagination as before, but in a very well-produced and fine-sounding environment, helped by strings, vocals and percussion. Also, Lantz' expanded arsenal of keyboards, like the Moog, Hammond and even acoustic piano, provides us with a richer sound palette than before. If you thought their debut 'The Plunge' was great, be prepared to be blown away by 'Moon Town', as it reveals new dimensions of their music, while still maintaining their raw, funky and dance-friendly formula that we know. Highly recommended! NIGEL F. MENDEZ (Canterbury Jazz Review, UK, September 2012)

Here's what you say about
Beat Funktion - Moon Town.