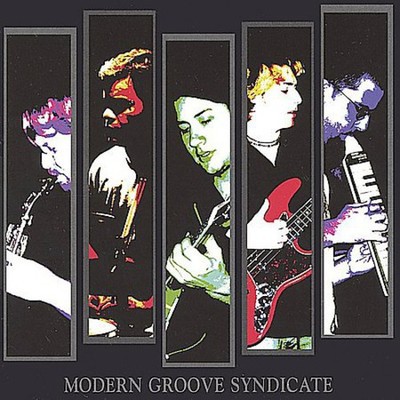 'This Jazz/Funk ensemble takes the stage to create something that's bigger than they are, maybe even cosmic.' Style Weekly 'What they brew is slim and trim, fast and loose, light and heavy, bumpin' and cruisin'...everything slips, slides, squeezes, and slithers too quickly, too many lines flow on too many levels for too short a time for anything to get out of hand' - The Hook 'With musical powerhouses such as Agents of Good Roots sax player JC Kuhl teaming up with the group, a Modern Groove Syndicate gig brings the house down.' Richmond Times Dispatch 'When Modern Groove Syndicate gets rolling, people move along with it and find themselves dancing, drawn to their feet, bouncing and bopping to the strong beats. They fall from crescendos, which are almost orgasmic in effect, and the surge begins anew for another assault on auditory sensibilities.' Richmond Music Journal 'They understand collaboration makes a great band, not competition, and this is a great band' - Richmond Music Journal '...their groove work is busier than most funked-up rhythm sections, but they have the chops to back it up.' C-Ville Weekly '... it'll be hard to find anyone doing it better...' - Richmond Music Journal 'Modern Groove Syndicate is poised to follow in the footsteps of their now famous predecessors [Dave Matthews Band] with their own unique grooves.' Punchline A funky quintet based out of Richmond, VA, Modern Groove's sound is guaranteed to spin your head, stir your soul, and shake your butt. Their genre defying sound is a gumbo of Funk, Jazz, Latin, Soul, Hip-Hop, and whatever else they might have been listening to that day. The Modern Groove Syndicate is an instrumental group relying heavily on composition, improvisation, and their own unique brand of energy and individual talents to make their point. While the group's influences are all over the map, one can hear elements of P-Funk, John Cage, Brecker Brothers, the Crusaders, Jimmy Smith, and the Meters within their sound. MGS has shared the stage with a wide variety of bands including: Cracker, The Tom Tom Club, The Samples, Dr. Didg, Agents of Good Roots, Ulu, Jimmies Chicken Shack, Eddie From Ohio, Zen Tricksters, Ike Willis & Project Object, Lake Trout, Schleigho, and Moon Boot Lover. MGS includes members of national recording Agents of Good Roots, Moderico, and Buzby. They've opened for such Jazz greats as John Schofield and Chuck Mangione. Daniel Clarke (Keyboards), Harmonium (in 2007 Daniel toured with Mandy Moore's band, in 2008 he will be on world tour with K D Lang) Joe DeNunzio - Drums Todd Herrington - Bass Frank Jackson - Guitar J. C. Kuhl (Sax). Additional musicians: Pete Anderson - Trombone; Matt Scott-Bari Sax; Taylor Barnet (Trumpet); Stephen Norfleet (Tenor & Soprano Sax's). All songs written by Clarke, DeNunzio, Herrington, and Jackson 'We recorded what you're hearing over a period of two days surrounded by friends, family, and loved ones. We played together live, in one room, and within arms length of each other to try to capture some of that magic feeling and to let the music breath it's own breath. What comes across is perfect, because it's not. Dig? We hope that you get out of this what we put in...'