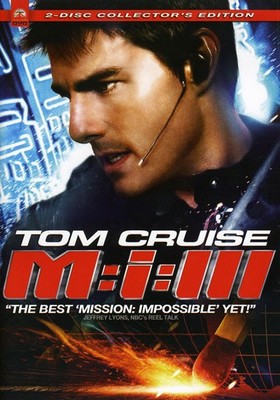 J.J. Abrams, creator of small-screen hits ALIAS and LOST, makes his feature film debut with the third installment of this successful series based on the hit 1960s television show. Secret Agent Ethan Hunt (Tom Cruise) has decided to take it easy and lead a somewhat normal life. He's even found his perfect woman, Julia (Michelle Monaghan), and is engaged. But when newbie agent Lindsey Farris (Keri Russell)-whom Hunt mentored-goes missing while on assignment, the reluctant agent finds himself back in business. Soon, with his old buddy Luther (Ving Rhames) in tow, along with team members Zhen (Maggie Q) and Declan (Jonathan Rhys Meyers), Hunt is traversing the globe on the trail of Farris's captor, Owen Davian (Philip Seymour Hoffman), an elusive international weapons dealer. The stakes increase when the villainous Davian gets a hold of Hunt's fiancee and uses her as a bargaining chip. A raucous combination of spectacular chases, explosions, amazing stunts, and elaborate schemes takes the Impossible Mission Force (IMF) team to Berlin, the Vatican, and Shanghai. With fascinating hi-tech tools these secret agents can impersonate virtually anyone, scale walls in an instant, infiltrate the tightest security system, and blow up the evidence when they're done. But facing their most formidable foe ever, Hunt and his fellow agents are fighting the clock to keep Julia alive and get Davian the mysterious weapon he is demanding. Cruise's personal involvement in the stunts lends a nice air of authenticity to Hunt, who also shows his emotional side in this outing as he juggles his secret life and his new love, as well as possible betrayal by someone inside the IMF. Laurence Fishburne also stars as IMF's Director Brassel, and Billy Crudup appears as his somewhat timid right-hand man, Musgrave. Special Edition includes a second DVD filled with bonus features.

Here's what you say about
Mission Impossible 3.