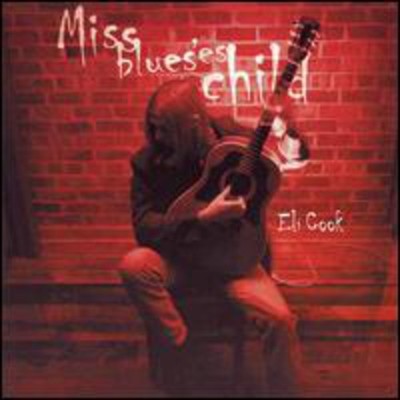 ELI COOK, acoustic guitarist: 'Whenever he puts a finger down, it means something.' --Leroi 'Worm' Patterson MISS BLUES'CHILD is the first solo/acoustic recording of Eli Cook. Recorded live and unedited in the studio, it contains four original blues-based tunes. DON'T RIDE MY PONY is a rollicking musical joyride that leaves Ole Man Death in the dust, featuring sideman Patrick McCrowel on banjo. MISS BLUES'ES CHILD borrows it's title from the poem by the renowned poet of the Harlem Renaissance, Langston Highes. THE HIGHWAY SONG,and TRICK BAG are both classic, contemplative blues compositions in which the guitar speaks with as much eloquence as the singer. Also featured is ANYTHING YOU SAY, a stunning contemporary song written and first recorded by the late Charles Caldwell on his posthumously released 'Remember Me' album, and IRENE, first recorded in l933 as a country waltz for the Library of Congress by Huddy Ledbedder who said he learned it from his uncle. Eli Cook's new arrangement of this great American folk song imbues it with the pathos and timbre that must have been felt by it's original author. Timeless blues standards performed on 12-string guitar include Robert Johnson's TERRAPLANE BLUES, Booker White's FIXIN'TO DIE, and traditionals GOIN; DOWN SOUTH, and POOR BLACK MADDIE. Eli Cook was born in Nelson County, VIrginia in 1986 and began his career playing acoustic blues when he was 15. His repertoire expanded playing gospel shows and revivals, and he formed his first electric trio, The Red House BLues Band, in 2002. Eli is called and 'blues phenomenon' by reviewers in nearby Charlottesville: 'Featuring fast-fingered guitar and a powerful voice beyond his years, Cook doesn't need any Robert Johnson-style pact with the devil to take him to the top.' (Mathew Hurst, C'ville Review) REVIEW SLANT MAGAZINE Miss Blues'es Child by Jonathan Keefe June 18, 2007 'It's been well over a decade since a young white kid staked a claim as the next great blues prodigyâ€"Kenny Wayne Shepherd never really transcended his obvious sources of influence, Jonny Lang turned into a gospel singer with decidedly mixed results, and Shannon Curfman never even recorded a second album. Enter 20-year-old Eli Cook, whose Miss Blues'es Child is among the most compelling debuts in recent memory. When so much of modern blues recalls the all-too-accurate Blueshammer sequence from Ghost World, it's refreshing to hear an artist like Cook, who doesn't bother with predictable 12-bar arrangements or rely on strident old-timey imagery. Instead, he attains a remarkable degree of authenticity from his fearless arrangements of Robert Johnson's 'Terraplane Blues' and Son House's 'Grinnin' In Your Face,' both of which showcase can't-be-taught instincts in phrasing and an ear for killer material. Even more impressive is that his four original compositions are arguably the best cuts on the album. The spoken-word intro to he title track, which takes it's title from a Langston Hughes poem, claims that it's a 'remix,' which barely does justice to it's inspired rhythmic structure, while 'Don't Ride My Pony' is built on some devilish banjo picking by Patrick McCrowell, making for a country-inflected barnburner. On these tracks, his willingness to toy with genre elevates Cook above all of the other supposed wunderkinds. Still, what's most striking about Cookâ€"since the reverb in the album's production does, admittedly, hide a few sloppier passages in his guitar-workâ€"is his otherworldly voice. A gritty, old-as-the-hills baritone, Cook's voice isn't pleasing in any conventional sense, but that's what makes it perfectly suited for blues. Singing about being destitute or outrunning death, Cook is never less than convincing. He's a kid just sick with talent and someone with the potential to reinvigorate a tired genre.'

Here's what you say about
Eli Cook - Miss Blues Child.