The Beatniks - Merry Christmas Everybody! 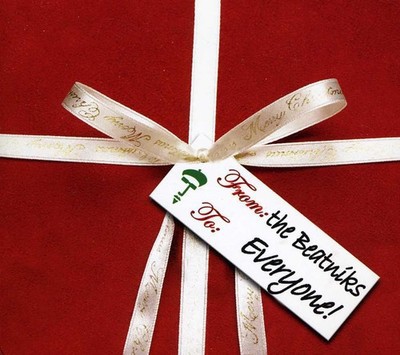 The Beatnik history can be traced back to the steamy coffee shops and poetry dens of Soho, In New York's Greenwich Village. Today, the Beatnik legacy lives on in five young men who adhere to the ideology that music is more than a mere background for our lives. They perform the music of the 60's & 70's (and 80's, too); with energy and passion that you won't find anywhere. Capturing the essence of the music with their charisma, chemistry and natural talent is why people all over the world are fans of the band. Since their explosive debut in the early 90s', the Beatniks have been pleasing audiences ranging in age from eight to eighty with their signature energy, classic sound and vigorous stage presence. With over 5,000 performances since their inception, they have headlined shows that have drawn crowds of 35,000 people, and have proven to be one of the largest drawing bands, consistently selling out the venues they play. Performances include: The Seattle Mariners post-game concert at The Kingdome, Safeco Field, NYE at Caesar's Palace (Lake Tahoe), Absolut Vodka 'Absolute Album Covers' Release Party (NYC), Aladdin Hotel (Vegas), Ameristar Casinos, House Band at Muckleshoot and Tulalip Casinos (WA), Detlef Schrempf's Celebrity Golf Classic Gala, The Bite of Seattle, Portland, The Portland Rose Festival, Taste of Edmonds (sponsored by MTV), Taste of Tacoma, The Seafair Ball, and many major Gala's in many cities throughout the U.S. In addition, they were the winning band on the world's premier of the nationally televised VH-1 show 'Cover Wars', hosted by Paul Schaffer from David Letterman. National sports teams enjoy hiring the Beatniks. The Seattle Seahawks hired the boys to play two seasons as the house band during all home games on the turf. The Seattle Mariners, Emerald Downs Racetrack and the Portland Trailblazers, have all chosen the band for their events. National celebrities and legends not only hire the band, but are frequently seen on the stage playing with them; Alan White (Yes), Roger Fisher (Heart) and Goldie McJohn (Steppenwolf), to name a few. When Bruce Willis needed a high-caliber act to christen his new night club, The Mint, in Sun Valley, Idaho - he called the Beatniks (Bruce even sat in with his harmonica). Paul Allen has jammed with the Beatniks on stage, as seen on CNN and in the Seattle Times Picture of the Year. Other celebrities including Detlef Schrempf and Richard Karn (Home Improvement) also had the band play for their private parties and special events. Some celebrities and others that have hired the band shall remain confidential, in accordance with their wishes. The Beatniks have also opened shows for national acts The Go Go's, The Beach Boys and Three Dog Night. Top corporations have chosen the Beatniks to perform at their holiday parties, awards banquets and product launch parties. These clients include : Microsoft, Intel, Nike, Merix, Nordstrom, The Bon, Bank of America, AT&T, Sprint, Costco, Merrill Lynch, Chicago Title Co, Preston, Gates and Ellis, Polaris Venture Capitol, Vulcan Inc., Sheraton Hotels, Deloitte & Touché Consulting Group, MCM, Cisco Systems, SSA Construction, Haagens & Berman Law Firm, American Seafood's Co, American Bar Association, American Express, Young Presidents Organization, The Independent Film Channel, Expedia and many, many, many more. When it has comes time to raise funds and awareness, the Beatniks have come to the aid of charities, associations and volunteer groups including: Seattle Works, Seattle Emergency Housing, City of Hope, Treehouse, Leukemia Society of America, Cystic Fibrosis Foundation, United Cerebral Palsy, United Way Boys and Girls Club, plus many more. They have garnered both local and national press acclaim, with The Seattle Times proclaiming the Beatniks 'The Biggest Band in Town' in terms of popularity, and with Seventeen Magazine hailing the band's ability to entrance audiences of all ages. The attention from press has generated requests for shows all over the world, sending the boys as far as the Hard Rock Café in Cancun (Mexico) during spring break, where they 'played to difficult audiences...(and) injected the entire restaurant with a rare enthusiasm.' Others say: 'Fabulous,' 'Captivating,' 'Festive' 'Magical' and 'True pro's at entertaining and performing...' From NYC (Absolut& VH-1) to San Francisco and Monterey, CA, the Reno Hilton (Nevada) to Chilkoot Charlie's (Alaska) and to Mexico, the band is known to mesmerize audiences throughout the world. The Beatniks have received kudos from virtually every organization that they have played for: from nightclubs, private parties, casinos, corporate parties and weddings. Always praised for their professionalism and nonstop energy, both on and off the stage. This energy is not only emoted through their music, but also in their humor, intensity and spontaneity, as they are able to play practically any song the audience requests (even if they have never performed it before). The question isn't 'Who has hired the band' but rather 'Who has not!' They want to play for you! The Beatniks are a rarity; not often does a band come along that is able to do everything right, but do it to near perfection as well. In true Beatnik tradition, these boys will provide the feel and soul of an era long erased from our calendars, but not from our memories...they create the memories of a lifetime.

Here's what you say about
The Beatniks - Merry Christmas Everybody!.