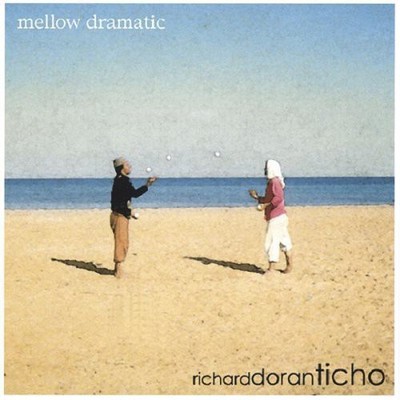 Richard Doran Ticho's Mellow Dramatic... contains 12 stirring and thought provoking songs...featuring some of New York's finest talents: • David Bennett Cohen, accomplished music industry innovator (Country Joe & The Fish, The Blues Project & Rent) shining on both Keyboards and Guitar... while acting as co-producer... • Tim Tindall (straight from Phoebe Snow's Natural Wonder) on Bass... • Kenny Soule (Nantucket, Dag) on Drums... • George Naha (Sam Moore, Donald Fagen) on Guitar... • Frank Colón (The Manhattan Transfer, Harry Belafonte, Mary J. Blige, Herbie Hancock, Gato Barbieri and George Benson) on Percussion... • Shelly Bhushan (The Shelly Show) and Julie Manasian on vocals. Even with this brilliant cast, it's the story behind the music that makes this CD unique. Richard Doran Ticho began writing Mellow Dramatic in Jerusalem at the age of 26 in 1994... He became a member of the lead news crew for the Israeli Broadcasting Authority... and was on the front lines as the peace process crumbled, as a prime minister was assassinated, as suicide bombers struck... and then, at the age of 30, this peace-loving left-wing American-Israeli was given an M-16, sent into the desert for basic training and dumped in the middle of a war zone. He returned to the U.S. with over 5 hours of music and 175 pages of related writings and lyrics. In 2002, Performance Designs, Incorporated signed on to back the production of a studio album of Mellow Dramatic. Rehearsals with the band and recording at Water Music Studios in Hoboken, New Jersey took place from 2002 to 2004... and with mixing and packaging completed... Richard Doran Ticho's Mellow Dramatic is available... here at CDBABY... and iTunes and beyond. Since it's release... 'The Garden State' has hit the radio... and is the top selling single from the project. 'Mellow Dramatic', 'Ocean of Life' and 'Driving with Distractions' have all found their way onto radio stations playlists. Recommended Listening: MELLOW: the garden state, ocean of life, everyday's a holiday, peace shakin' DRAMATIC: mellow dramatic, driving with distractions, hate and fear.

Here's what you say about
Richard Doran Ticho - Mellow Dramatic.