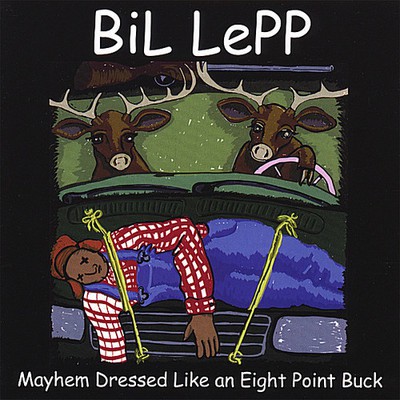 Bil Lepp is a Parent's Choice Award winning storyteller and five time champion of the West Virginia Liars Contest. He tells original, hilarious, tales that will bring a smile to the face of even the most ill-humored person at your event. Bil has been a Featured Teller at the National Storytelling Festival several times, and at The Smithsonian Folklife Festival. Bil is the author of three books of tales, five audio collections, and he has had stories published in several national magazines. Duke Divinity Magazine called Bil's stories, 'Awe inspiring cathedrals of flapdoddle and bull.' Bil has been telling tales for over fifteen years. He tells original tall-tales written by himself and his brother. Bil has been a regular at the West Virginia Liars Contest since 1990. 'Lepp is a side-splittingly funny man' -The Smithsonian Center for Folk Life 'Lepp is a well known liar...[his stories] make you laugh' -U.S. News- Jill Jordan Sieder "He the [WV Liars'] contest and has been honing his lying skills ever since." -John Roach, National Geographic News With his easy going style and clever, complex, fall-out-of-your-seat humor, it is easy to see why Bil Lepp has quickly become a favorite at schools and festivals all over the country. Lepp tells original Appalachian flavored tall tales, stories of growing up in the small mountain town of Halfdollar, WV, that are almost but not quite true, and mostly true stories of family, travel, and life experiences. Bil is five time champion of the West Virginia Liar's Contest, has been featured at the National Storytelling Festival numerous times, and spoken at the Smithsonian Folklife Festival. Bil has been telling tales for 17 years, and is the author of three books of tales and five audio collections. His recent recording, "The Teacher in the Patriotic Bathing Suit", won the Parent's Choice Approved Award from the Parent's Choice Foundation. Bil lives in Charleston, WV with his wife and two children.

Here's what you say about
Bil Lepp - Mayhem Dressed As An Eight Point Buck.