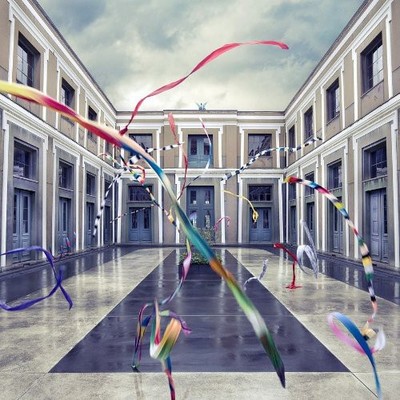 Newly signed to 4AD, Efterklang make their label debut with Magic Chairs, their third full-length studio album on February 22nd 2010. Since 2000, the Copenhagen-based quartet (plus an ever evolving number of collaborators) have been quietly honing their craft, fusing left-of-centre electronic beats with grand orchestral gestures. Self-sufficient by nature and necessity, the band have until now, always written, recorded and produced every element of their music from the comfort of their Copenhagen bunker. In this time, they have also released records through their own Rumraket label, working with the likes of Grizzly Bear, amiina and Slaraffenland also. So far, the results have been nothing short of revelatory; in particular, 2007's hugely ambitious Parades, an album that was difficult to define but even harder to fault, it raised their profile enormously and with Magic Chairs, they continue their evolution, exploring previously unchartered territory. Taking inspiration from the great purveyors of rock and pop music who reveled in the joys of a simple pop melody, Efterklang set about stripping back their own music to it's basic core, road-testing new tracks at live shows before committing them to tape. Like everything else, the recording process was also to be a brand new experience and unlike the lengthy gestation of Parades, recording for Magic Chairs was a relatively brief and straightforward business. Removing themselves from their home city and heading to Aarhus' Feedback Recording Studio, the band recorded basic tracks as a band (drums, bass, guitars and piano), replicating the live set-up from where the songs had initially taken form. Later, back in Copenhagen, orchestral flourishes were added and guest musicians were called upon (including their touring band members - Peter Broderick, Heather W. Broderick, Frederik Teige and Daniel James). for even greater clarity of sound, British engineer and producer Gareth Jones (Nick Cave & the Bad Seeds, Depeche Mode, Interpol, Mogwai, Grizzly Bear, Wire and more) was drafted in for mixing duties to work alongside their in-house electronics wizard, Mads Brauer. The result is an intimate and immediate record that exudes warmth. The grandiose classical structures heard so prominently and admired so highly in previous albums Tripper and Parades have been replaced by something far more streamlined, deconstructed and altogether melodious. Opening track 'Modern Drift' is a statement of intent with it's intricate and looping arpeggios whilst 'I Was Playing Drums' is arguably their most accessible pop song to date, the echoes of it's refrain linger irresistibly in the ear. Magic Chairs still bears the occasional signature moment (an electronic buzz here, a choral flair there) but all told, it is an album that is an even bolder step forward.

Here's what you say about
Efterklang - Magic Chairs.