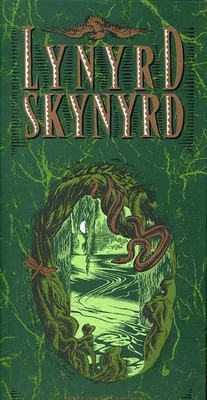 It was only fitting that the ultimate Southern rock institution, Lynyrd Skynyrd - certainly one of the more tragic stories in rock & roll history - should be one of the first bands to benefit from a comprehensive box set. Following the format of the highly successful Led Zeppelin box set, this three-disc, 47-song anthology provides a near-perfect career retrospective, complete with a carefully researched booklet with meticulous historical essays and rare photos for the new and rabid fan alike. The latter will probably be most interested in disc one, which features a number of early demos dating back as early as 1970 and not featured in prior collections, as well as an embryonic demo of "Freebird" minus it's extended-jam coda. The nine-minute version from the band's milestone debut, Pronounced is also featured here, of course, as is most of the material from the group's next album, Second Helping, generally regarded as their career peak. Disc two alone could serve as a greatest-hits set, as classic after classic is rattled off in mind-blowing succession. And even when the creative fires finally begin to wane somewhat as the set approaches the Nuthin' Fancy and Gimme Back My Bullets material (recorded at a time when the band was plagued by overwork and escalating drug abuse), the set wisely offers alternate versions and live renditions to keep things interesting. The first half of disc three alternates never-before-heard concert performances with other, equally inspired live versions. It's second half is dominated by the unintentional swan song Street Survivors. Released only three days before the fateful plane crash, the album saw a re-energized Skynyrd achieving a new level of maturity, power, and purpose. Although most box sets tend to be a bit too much for the casual fan to swallow, this one feels just right.