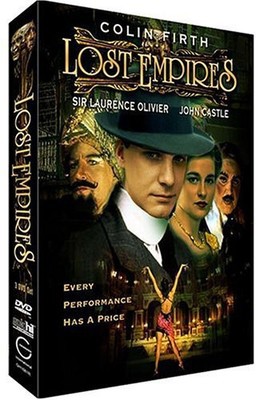 This extraordinary Masterpiece Theatre featured production based on the novel by JB Priestley, and featuring one of the last performances of Sir Laurence Olivier, takes you to the last days of Britain's innocence and the glamorous, magical world of the great music halls - which once brought entertainment to millions. In 1913 young Richard Herncastle, played by Colin Firth (Bridget Jones' Diary, the English Patient, Pride and Prejudice) escapes from the stuffy, provincial English background in to the glitter and excitement of the theatre world. Funny, sad, nostalgic, Lost Empires follows Richard from his naive, country upbringing to join his uncle Nick Ollanton (John Castle- Gods and Generals), a famous music hall illusionist - knows as the Indian Magician, Ganga Dun. The mystery of illusions, on and off the stage, is eventually shattered for Richard, whose dream of becoming a famous painter gets sidetracked while he contends with men gone nearly insane, the lusts of countless women, and a murder that hangs over his head... As Lost Empires opens, looming on the horizon is World War I, which will destroy much of Britain's tradition, including the great era of the Empire music hall. Soon the cinema will replace the eccentric and colorful performers whose home is the world of variety. With amazing attention to detail of the period, and fantastic, Broadway style musical showcasing, this series was filmed in a number of authentic music halls around the United Kingdom and co-stars Gillian Bevan, Carmen du Sautoy, and Beatie Edney.

Here's what you say about
Lost Empires 3-Pack.