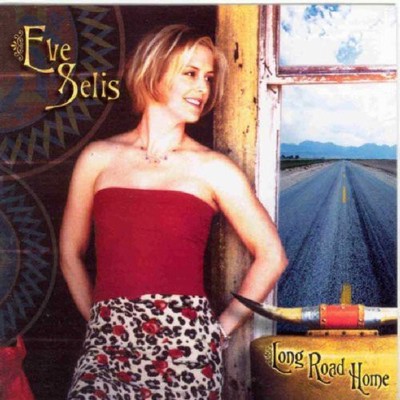 With her foot on the gas and leaning hard on the horn, Eve Selis is in the fast lane to stardom, running every red light in her path. Her third independent CD Long Road Home won Best Pop Album in the 2000 San Diego Music Awards, and to the many fans of this hard driving diva it was recognition long overdue. For over six years Eve Selis has been well-known both to the San Diego music scene, and to those lucky enough to have seen her on tour, where she plays over 100 dates a year. She has headlined coast to coast, from the House of Blues in Hollywood to the legendary Bitter End in NYC, and has shared the stage with Crosby, Stills & Nash, Jewel, Chris Isaak, Travis Tritt, and Ben Folds Five, to name just a few. Add to this the millions of music fans who visit MP3.Com, where she is one of the top female artists with over half a million downloads, and you have one of the true indie success stories of the new millennium. Eve's voice is regularly lauded by critics as nothing short of a masterpiece: passionate, melodic, raspy and sweet, with a phenomenal range rarely heard in pop music. Billboard Magazine describes her vocals as 'fiery' and 'emotional', while SLAMM Magazine used the delicious phrase 'lemonade and whiskey.' Her innovative sound, which she calls 'Roadhouse Rock,' is a unique blend of soaring pop melodies, hard-hitting rock and roll, and alternative country twang, topped off by Eve's powerful technique and passionate delivery. On stage Eve delivers her stunning performance with equal parts innocence and authority, always soulful, strong and sexy. Her band, which includes some of the finest musicians in Southern California: Marc Intravaia (guitar), Rick Nash (bass), Bob Sale (drums), and Sharon Whyte-Soldi (keyboards, accordion), sets audiences on fire with an exciting combination of technical prowess and improvisational bravura. The San Diego Union Tribune labeled them a 'powerhouse live band.' After one of his own shows last summer, Chris Isaak heard the band playing at a local club and was so impressed he joined Eve onstage for over an hour, sharing vocals with her on some great traditionals as well as originals from each others' catalog. He signed her guitar that night with the phrase 'Selis rocks me!' Crosby, Stills & Nash dedicated 'Darkstar' to her after her mesmerizing opening set. In addition to dazzling live audiences, Eve has broken new ground in self-promotion on the Internet, garnering success on many MP3 web sites and winning fans worldwide through cyber-space. She has landed 10 #1 hits on MP3.com's various charts, including the genres of Rock, Alternative, Americana, AAA, and Alternative Country. In December of 2000 she peaked at #3 on the overall Top 40, out of 750,000 songs from over 115,000 artists. From Brazil to Russia, and from Japan to Belgium, Eve Selis fans are multiplying exponentially. She is one of the most respected artists in the vibrant local music scene as well. Eve was nominated for two San Diego Music Awards in 1999: 'Best Adult Alternative Artist' and 'Best Adult Alternative Album' for Out on a Wire, which was co-produced by Thom Wilson (the Offspring, Rickie Lee Jones). In June of 2000, her video for 'Show Me What Love Is' won a San Diego Emmy Award. She and her band were also nominated Best Rock Band in San Diego by the San Diego Reader in their 2000 Reader's Poll. To top off her busiest and most successful summer ever, on September 12, 2000, Eve was the special musical guest on CNBC's top-rated daytime show, 'Power Lunch,' which is broadcast live into 170 million homes worldwide. That fall her new CD, Long Road Home, won 'Best Pop Album' in the 2000 San Diego Music Awards, and was also nominated 'Album of the Year.' Eve's commitment to the community is reflected in her involvement with the Nicole Brown Simpson Foundation, a charity which helps battered women and abused children. She recently sang on a benefit CD and donates proceeds from her own CD sales to the charity. Eve and guitarist Marc 'Twang' Intravaia, are the primary songwriters, though the album is sprinkled with such stellar covers as Johnny Cash's 'Folsom Prison Blues' and Steve Earle's 'Christmas in Washington.' The two hooked up in the early '90s on a flight to Spain when Marc overheard Eve singing to herself in the seat behind him. From that fortuitous meeting sprang a fertile creative partnership. Their songs are honest, emotional expressions of hope, doubt, love and yearning - the very fiber of life's struggle. This is music which is utterly fresh, yet has vast, wide-ranging appeal. Her audience demographic incredibly includes fans from every age group, ethnicity and walk of life. Driving with the top down and the radio blaring, hitting every roadhouse along the way, Eve Selis is a true crossover sensation, and her fans are loving the ride. Just be sure to fasten your seatbelt. It could get bumpy takin' that long road home.

Here's what you say about
Eve Selis - Long Road Home.