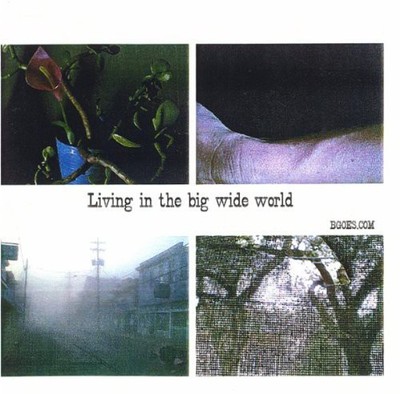 Andi Hoffman & B-Goes are the musical equivalent of Teflon. Listen to Living in the Big Wide World and see if you can assign any one, two, heck, three styles to their sound. Roots rock, calypso, Cajun, reggae, zydeco, alt country -- this list could take up the whole review. You know what -- forget about labeling the style. The only label that fits is cool. They're doing their own thing and it's great. Each song has it's own merit -- expect no filler songs on this album. The songs vary in speed and (obviously) style, but all are fun. 'I See It In Your Eyes' kicks the album off with a cool funky guitar chord. 'El Rancho Hotel' is one of those ramblin' songs -- you feel like you're in a convertible on an open desert road (a la David Lynch's Wild at Heart). 'Crystal Waters' sounds like a tribute to the Grateful Dead or Phish. 'I Liebe Di Fuer Immer' shows that Cajun/zydeco influence both vocally and instrumentally. If only I knew what they were saying.... 'Fingertips' is a delightful song with a great pace and a catchy chorus that is absolutely addictive. 'Living in the Big Wide World' is a complex song that operates on multiple layers. The key to this song is the simplicity of each of it's elements. The instrumental tone, a straightforward melody, is overlaid with a speech by Rev. Martin Luther King Jr. from 'The Three Dimensions of a Complete Life.' Andi's vocals are woven somewhere in-between the two. He keeps his voice pretty even keel for the song and let's the lyrics anchor the in-between points the speech excerpts. This song is a fine display of artistry. Another well-composed song, 'Kangaroo Café,' has a segmental approach in lieu of layers. It starts off with a solitary and slow Andi, then is joined with great harmony vocals and a faster pace. Towards the end of the song, the melody slowly transforms into the classic tune 'Blue Moon.' 'Kangaroo Café' is another fine example of the cool details this group puts into each song. I can't say enough good things about this album. Living in the Big Wide World is one of those rare albums where everything fits together into an eccentric (but cool) puzzle. Whether it's the wonderfully subtle instrumentation of the B-Goes, the multi-layered feel, Andi's original voice, little compositional details or the well-written lyrics, you've got a magnificent collection of songs with superb performances. - Rambles written by C. Nathan Coyle published 6 April 2003 Singer/songwriter/auteur Andi Hoffmann is at root a romantic poet who continues to create rich lyrical compostions in a style best expressed as 'organic rock.' Born and raised in Switzerland, now making his home in New Orleans, Louisiana, Hoffmann along with his Kaleidoscopically eclectic band, The B-Goes, plays songs that are in turn sweet, melancholy, fun, funky, angry, and ethereal. On his most recent CD 'Living in The Big Wide World', Hoffmann's music takes some surprising turns. Here alongside the roots rock and zen-alpine soundscapes featured on previous recordings, The B-Goes expand into a dizzying array of styles--cajun, calypso, reggae, swamp pop, hip-hop, and hi-life. The result is a fascinating CD full of exotic hybrid songs offering artistically fertile settings for Hoffmann's worldly-wise storytelling, his unique instrumentation ideas, and The B-Goes' exquisite vocal harmonies. Yet even beyond crafting creative new musical formulas, Hoffmann displays a deepening awareness of the greater ties that bind us all, embracing the passion of a political vision based on the peace philosophies of Gandhi and Martin Luther King.

Here's what you say about
Andi Hoffmann - Living in the Big Wide World.