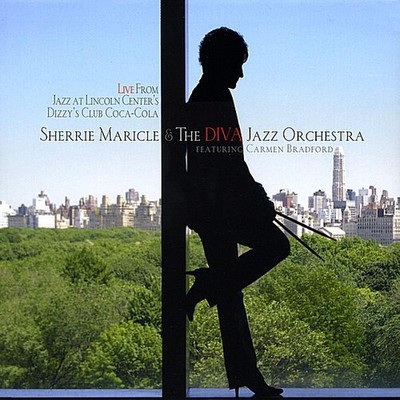 Hard-charging. Powerful. Immersed in the history of their craft and in total command of their instruments. That's The DIVA Jazz Orchestra - an ensemble of 15 extremely talented and versatile musicians who just happen to be women. They can't help it - they were born that way. Headed by swinging drummer Sherrie Maricle, DIVA exudes the excitement and force found in the tradition of the historic big bands but with an eye towards today's progressive sound of originality and verve. With New York as their home base, DIVA performs all over the world playing contemporary, mainstream big band jazz composed and arranged to fit the individual personalities and styles of the musicians themselves. Audiences can expect to hear high-energy performances packed with unique improvisation, spontaneity and fun. The inspiration for DIVA came from Stanley Kay, one-time manager and relief drummer for Buddy Rich. In 1990, Kay was conducting a band in which Sherrie Maricle was playing the drums. Stanley immediately picked up on her extraordinary talent and began to wonder if there were other women players who could perform at the same level. The search was on and through nationwide auditions, the foundation for The DIVA Jazz Orchestra was poured in 1992 and what emerged is the dynamic musical force that holds forth to the present day. In 2006, DIVA was voted one of the best big bands in the world in both DownBeat magazine's annual Critic's and Reader's Polls. To fully grasp how wide the appeal is of this incredibly gifted ensemble, one has only to read the catalog of prestigious venues in which the band has performed, worldwide. In fact, it's almost easier to ask the question: Where haven't they played? Here is but a partial list: Carnegie Hall with the New York Pops Orchestra, Kennedy Center, Verizon Jazz Festival at Lincoln Center, Blue Note, Dizzy's Club Coca-Cola at Jazz at Lincoln Center, Birdland and the Apollo Theater in New York. Add to that, the Jazz Showcase in Chicago, Manchester Craftsmen's Guild in Pittsburgh, and Symphony Halls in St. Louis, Philadelphia and Cleveland, plus the Playboy Jazz Festival at the Hollywood Bowl and the Cinegrill in Hollywood. International appearances include Le Meridien Hotel in Paris, France, Teatro de Sistina in Rome, Italy, Berlin Jazz Festival in Germany, Salzburg Music Festival in Austria, Bern Jazz Festival in Switzerland, Montreal and Ottawa International Jazz Festivals in Canada, Bogota International Jazz Festival in Colombia, Jamaica Jazz Festival, Zagreb Jazz Festival in Croatia, and the Pori Jazz Festival in Finland. As if the list of settings at which DIVA has performed isn't impressive enough, they have also shared the stage with Nancy Wilson, Joe Williams, Diane Schuur, Carmen Bradford, Marlena Shaw, Dee Daniels, Maurice Hines, DeeDee Bridgewater, Rosemary Clooney, Ann Hampton Callaway, Jack Jones, Clark Terry, Dr. Billy Taylor, Terry Gibbs, Tommy Newsom, Randy Brecker and Dave Brubeck. The band has also made numerous television appearances highlighted by multiple feature slots on CNN's Arts Break plus a feature segment on the network television program 'CBS Sunday Morning,' a spotlighted segment as part of The Kennedy Center's 25th Anniversary Special and a critically acclaimed feature on the Japanese television NHK network. DIVA proudly boasts of a very impressive series of recordings, most recent of which is the industry-applauded TNT - Tommy Newsom Tribute - a compilation of charts the late Mr. Newsom arranged exclusively for the band. Other CD's include Live in Concert, I Believe in You, Leave It To DIVA and Something's Coming. Look for DIVA's newest recording, Live at Dizzy's Club Coca-Cola, to be released in early 2008. Whether live or via recording, The DIVA Jazz Orchestra always guarantees an evening of spirited and exciting entertainment that leaves the audience on it's feet pleading for more.

Here's what you say about
Sherrie Maricle & the Diva Jazz Orchestra - Live from Jazz at Lincoln Center's Dizzy's Club Co.