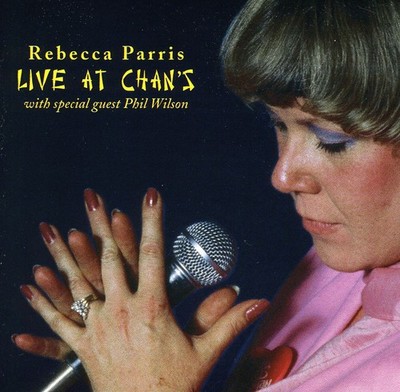 In the jazz world, the town of Woonsocket, Rhode Island has two claims to fame: it's native pianist Dave McKenna, who studied music with the nuns there in the 1940's; and Chan's a Chinese restaurant with a weekend jazz policy that has endured since the late '70's. Chan's is located at 267 Main Street in the heart of downtown Woonsocket, but at night the neighborhood feels like one of the more desolate stops on the jazz map. The parking lot across the street clears out; the nearby antique shops, tattoo parlor, and train depot are all dark. Yet some of the hippest sounds in New England come from Chan's. Mark Murphy has recited Kerouac and sung miles Davis's Boplicity there; Dizzy Gillespie played the room in 1987 for his seventieth birthday; McKenna, Gary Burton, and Carol Sloane are regulars. But Chan's number-one daughter is Rebecca Parris. In 1985, when she made Live at Chan's, her decade-long apprenticeship as a top-40 club singer wasn't far behind her. Jazz, not rock, was Rebecca's true calling: a fact confirmed at the recording session, when she played to a room jammed to double capacity. The audience heard a singer with a bold tenor saxophone of a voice, disarming confidence, and an R&B-tinged jazz sense that won her the admiration of Gillespie, Sarah Vaughan, Carmen McRae, and Shirley Horn. 'Everybody can feel Rebecca's presence', owner John Chan says of this tall, imposing blonde, 'Things happen when she walks in a room.' The songs here are some of the most familiar in pop-jazz, but Rebecca's warmth and soulfulness give them each a personal stamp. She improvises freely, but always at the service of the lyric: a value inspired by McRae, whose 1980 duo album with George Shearing, Two for the Road, had a major impact on Rebecca. More Than You Know, borrowed from that disc, shows off the earthiness that she and McRae share. My Melancholy Baby is unjustly known as a creaky request tune; Rebecca's smoldering performance restores it's original beauty. Her six accompanists-trombonist Phil Wilson, trumpeter Greg Gisbert, multi-reed player Scott Robinson, pianist Paul Schmeling, bassist Marshall Wood, and drummer Marty Richards-all share her sensitivity, while giving her a strong rhythmic push. Rebecca's own strength shines through on Blue Monk, a tough song of perseverance composed by Thelonious Monk, with a lyric that Abbey Lincoln wrote to sing on the 1961 album Straight Ahead. (Lincoln defined 'monkery' as 'the act of self-searching, like a monkey does.'). Angel Eyes brings out the pathos in most singers, but not in Rebecca, who quickens the pace and adds a defiant edge. 'It's a feminist mindset, I guess,' she explains. 'When I think of somebody messin' around on me, I don't get sad, I get angry!' For all those who are awaiting their next-or first- chance to hear Rebecca in person, Live at Chan's is sure to raise the anticipation. -James Gavin New York City, 1998.

Here's what you say about
Rebecca Parris - Live at Chans.