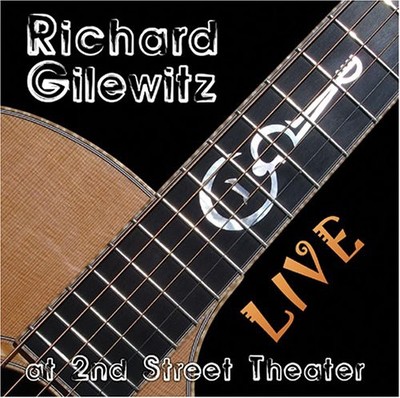 Live at 2nd Street Theater. Recorded during a live concert on August 20, 2005, at the 2nd Street Theater in Bend, Oregon, this newest CD is the result of fans asking for not only more music by Richard, but for a recording of his stories and live performances. A look at the song titles will bring to mind familiar tunes that are often included in Richard's concert performances. However, interspersed among the songs is what makes this 46-minute CD live and kicking- those amusing and quirky stories that are always true! Among the 13 tracks are three typical tickle your funny-bone stories that will leave the listener wanting more. The neck snap, throat capo tale relives the adventures of Florida's heavy metal air guitar champion, while "Walbert, Wigs, and Nope" leaves little room for doubt that Richard is not like the other kids on the block! And true to form, this latest project will not disappoint even those who have attended a number of Richard's concerts, as once again there is always a surprise around each turn. This time joining Richard is Radim Zenkl, master mandolin player and fellow Breedlove Guitars clinician. Their combined efforts on "Minuet for the Backroads, "The Last Steam Engine Train", "The Maison Blanche Exit Song", and "Study in Bm" delighted the crowd that magical evening in Oregon, and will give the listener countless reasons to put this CD in rotation! Here's what a few folks are saying about Richard's performances... "Richard Gilewitz is possibly one of the strangest men in acoustic music today. Much of the charm of a Gilewitz performance is in the stores he tells." Spectrum "Similar to like-minded souls Jorma Kaukonen, John Fahey and Sandy Bull, Gilewitz's acoustic magic works best in a live setting." NASHVILLE "Richard Gilewitz has found a superb balance of playing skilled techniques in a wide range of styles in a rousing own signature." Bridge Guitar Reviews.

Here's what you say about
Richard Gilewitz - Live at 2nd Street Theater.