The Search for Signs of Intelligent Life in the Universe 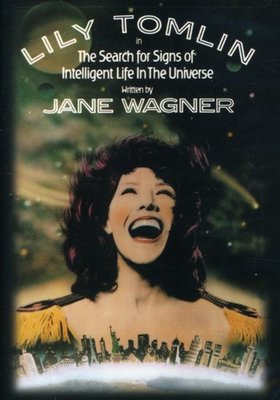 Lily Tomlin, one of America's foremost comediennes, continues to venture across an ever-widening range of media, starring in television, theater, motion pictures, animation, video, and personal appearances throughout the United States. During her extraordinary entertainment career, Tomlin has received numerous awards, including: six Emmys; a Tony for her one woman Broadway show, Appearing Nitely; a second Tony as Best Actress, Drama Desk Award and Outer Critics' Circle Award for her one woman performance in Jane Wagner's the Search for Signs of Intelligent Life in the Universe; a CableAce Award for Executive Producing the film adaptation of the Search; a Grammy for her comedy album, This is a Recording as well as nominations for her subsequent albums Modern Scream, And That's the Truth, and on Stage; a Best Supporting Actress Oscar nomination for Nashville, and two Peabody Awards-the first for the ABC television special, Edith Ann's Christmas: Just Say Nodl and the second for narrating and executive producing the HBO film, the Celluloid Closet. The Search for Signs of Intelligent Life in the Universe is a kind of Gulliver's Travelogue on the latter half of the 20th Century.1 Serving as narrator is Trudy, a mad bag lady who has befriended aliens from outer space to take a look at 'a planet in puberty.' Trudy treads her way through the rich tapestry of the dozen characters that populate the play. This is a compendium of pop history, a living anthropological exhibit. But it is also a chronicle of the human heart, trying to mend it's bruises and ease it's disappointments. Never before seen bonus features include hilarious outtakes, conversations with Lily and Jane, writer's and actor's notes, archival footage and more!

Here's what you say about
The Search for Signs of Intelligent Life in the Universe.