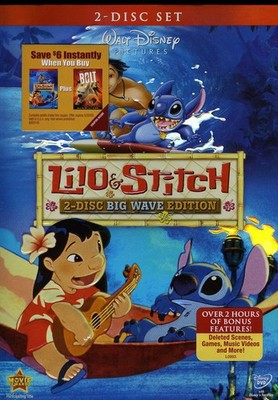 Far, far away, on an alien planet, a rogue scientist named Jumba has created a bright blue creature called Experiment 626, through illegal genetic research. This new creature loves destruction and chaos; he's considered dangerous enough to be exiled to a deep space lockup. But 626 steals a spaceship and escapes, touching down in Hawaii, where he ends up in a dog pound. He's adopted by Lilo, a spunky young girl, who renames her new pet "Stitch." Stitch turns out to be quite a handful-his destructive impulses are on full display as he trashes Lilo's house, among other naughty acts. Lilo is being raised by her older sister Nani (their parents died in an accident), and they are under surveillance by an evil social worker, Cobra Bubbles, who wants to take Lilo away from Nani. Director Dean DeBlois, Chris Sanders Voice Ving Rhames, David Ogden Stiers, Tia Carrere, Jason Scott Lee, Special Features: 2-Disc Set Region 1 NTSC Anamorphic Widescreen - 1.66 Audio: Dolby Digital 5.1 - English, French, Spanish Subtitles - French, Spanish Additional Release Material: Deleted Scenes Runtime: 85 Minutes.

Here's what you say about
Lilo and Stitch.