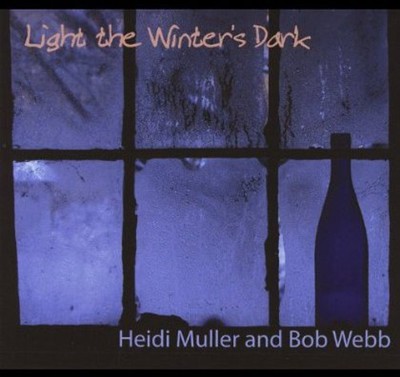 Heidi Muller and Bob Webb perform an eclectic mix of original songs and traditional music featuring Muller's songwriting, crystalline vocals and unique arrangements with guitars, Appalachian dulcimers, electric cello and mandolin. Described by Dulcimer Players' News as "one of the dulcimer community's best songwriters and performers," Muller made her name as a recording artist in the Pacific Northwest over the last 30 years, while Webb performed in Stark Raven, the original Mountain Stage radio show house band, for nine years, accompanying musical stars Odetta, Tom Paxton, Shawn Colvin, Peggy Seeger, Arlo Guthrie and many others. He made a career as a performer, teacher and recording engineer in Charleston, WV until they both moved to Enterprise, Oregon in 2012. Muller has released five CDs of her own and toured nationally. She and Webb have been performing since 2003 and recorded additional CDs. Their catalog on CD Baby includes Gypsy Wind and Giving Back (solo) and Seeing Things, Light the Winter's Dark and Dulcimer Moon (duo). They also appear on the Northeast Oregon compilation Songs from the End of the Road (Wallowasong). Muller's song "Good Road" has for 25 years been the theme song of the Inland Folk radio show on Northwest Public Radio and KPBX-Spokane. "Muller's songs express down-to-earth sentiments in lovely poetry," writes Rich Warren of Sing Out! Magazine. "She sounds like she truly loves singing and wants nothing more than to share that with you." Besides performing, Muller and Webb share a passion for teaching music to people of all ages. They host an annual adult music camp, Dulcimer Week in the Wallowas, and have worked extensively with at-risk children, both in the rural coalfields of southern West Virginia and in the inner city, through their own Music Mentors program and Clay Community Arts. They have published their own books for mandolin and dulcimer, and taught at dozens of folk and dulcimer festivals nationwide. They also enjoy being community artists-in-residence teaching music, songwriting, and recording oral histories. Funded by the Mid-Atlantic Arts Foundation, Muller collected the local history of Big Ugly Creek, WV and wrote songs with children and adults, which later culminated in a 200-page book she compiled, entitled Patchwork Dreams.

Here's what you say about
Heidi Muller & Bob Webb - Light the Winter's Dark.