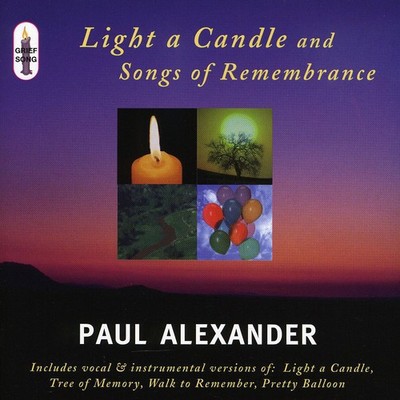 PAUL ALEXANDER - bio WHO IS PAUL? Paul Alexander is a singer, songwriter, psychotherapist, author, actor and performing artsist who has shared his music and message of hope throughout the United States and Canada. He is also the composer of the song LIGHT A CANDLE which has gained national attention for being played at candlelighting services and rituals of remembrance for the bereaved including The Compassionate Friends. Every year on World Candlelighting Day this song is utilized for support and hope while those coping with grief and loss light a candle in memory of their loved one. There are many funeral songs but this is a song of hope and inspiration and connection to loved ones who will never leave our memory . His recordings are resource tools being utilized by Church Groups, Funeral Homes, Hospices, and Hospitals as well as bereavement support groups and individual caregivers. Paul's contemporary style combined with his compassionate lyrics and compelling vocal delivery touch the heart and soul of the listener and provide healing and upliftment. Paul's music has been inspired and enriched through his work as a Psychotherapist and Hospice Social Worker. For over ten years Paul's bereavement work was in a hospice for terminally ill children journeying with the children and their families through the dying and the grief process. His grief work further moved into a private practice and strongly influenced his musical expression. His unique integration of his artistry and sensitive awareness to the hurting heart is what brings meaning to Paul Alexander's voice and music. Among his many original compositions there is one song that serves as a beacon in his creative life..Light aCandle has been widely used for candlelightings throughout the world and along with numerous originals such as Ray of Hope, Who Am I Now, When All is Said, Pennies from Heaven have inspired and comforted hearts searching for meaning following their loss. Facing the Holidays Following a Loss (VHS &DVD) has provided a model for coping with grief through the holidays and his interest in meditation has inspired Healing Meditation CD's as well a Grief Guide and Workbook frequently used for bereavement support groups. Paul's Concert and Workshop Presentation have been featured at : NATIONAL and LOCAL HOSPICE GROUPS NATIONAL AND REGIONAL CATHOLIC CHAPLAINS NATIONAL AND REGIONAL CONFERENCES FOR THE COMPASSIONATE FRIENDS NATIONAL AND LOCAL BEREAVED PARENTS OF AMERICA FUNERAL HOMES AND NFDA ADEC (ASSOCIATION FOR DEATH EDUCATION AND COUNSELING) NATIONAL CATHOLIC MINISTRY TO THE BEREAVED BEREAVEMENT MAGAZINES HOMECOMING CONFERENCE HOSPICE FOUNDATION OF AMERICA - TELECONFERENCE WORLD GATHERING ON BEREAVEMENT Paul is blessed to have sung in St. Patricks Cathedral for Cardinal O'Connor's youth Masses for 7 years and was complimented as being the "best leader of song" he had ever heard. In the secular world Paul has performed as actor/singer in many cabaret productions including A Celebration of John Denver: Heart to Heart which resulted in his very special tribute CD. Musical theatre credits include Godspell, Company,Cabaret and has studied acting with Alec Baldwin, Michael Nader and Bill Esper Studios. He has appeared with Cokie Roberts as guest singer and artist in the award winning Children Mourning presentation by Hospice Foundation of America. His recent musical theatre talents have brought him to work with Ms. Julie Andrews in the New York debut of The Boyfriend. He was thrilled to record Gone Too Soon with it's composer Larry Grossman musical composer of many Broadway shows. His newest Christmas CD and upcoming Songs of the 40's widen his musical appeal as he shares his gift of song and compassion in numerous venues. Whether in his music of healing for the bereaved or in his church ministry or in his contemporary and theatre work Mr. Alexander brings a soulfulness and richness of expression to every word he sin His griefsong.com collection is carried by bereavement resource centers including Centering Corporation, Compassion Books, Bereavement Publishing, New Leaf Resources, Grief Inc, Grief Support Services © 2000 Paul Alexander, All rights reserved. P.O. Box 858, Amagansett, NY 11930 (800) 538-4158 EMAIL: [email protected]

Here's what you say about
Paul Alexander - Light a Candle & Songs of Remembrance.