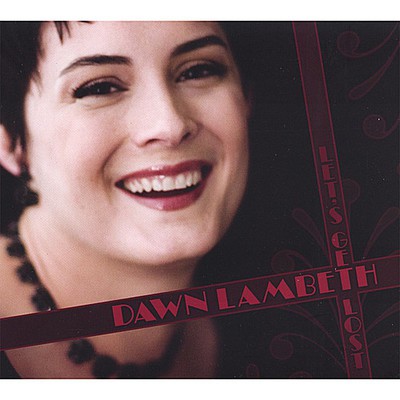 With her new CD, 'Let's Get Lost', the young vocalist Dawn Lambeth showcases her love for and dedication to the wonderful popular songs of the 1930&'s and 40's. Dawn and her band play elegant, classic-styled swing music with creativity and vitality. Backed by an all-star group featuring the Teddy Wilson-inspired piano of Chris Dawson and master guitarist John Reynolds, Dawn's silky, pure voice brings to mind chanteuses of the past such as Connie Boswell, Mildred Bailey and Jo Stafford. Dawn specializes in early jazz and swing, the joyous and romantic melodies of the twenties and thirties. She's a classic jazz vocalist in every sense of the word, bringing out the beauty of timeless melodies and the wit of great lyrics. Dawn is fortunate to have some of the best on the West Coast accompanying her. In addition to Dawson's piano and Reynolds' guitar, Dawn's recording features the sophisticated clarinet of Bob Reitmeier, the swinging Kansas City saxophone of John "Butch" Smith, and the searing swing trumpet of Marc Caparone. They're all supported by the solid bass and guitar of Clint Baker and Jeff Hamilton, one of the finest swing drummers working today. Musicians Bios Chris Dawson, one of the finest swing-style pianists on the West Coast, is a dedicated professional who draws his inspiration from the music of Teddy Wilson, Fats Waller, Hank Jones and Count Basie. Chris has worked with many musicians including Patti Austin, Dan Barrett, Brian Bromberg, Frank Capp, Jim Cullum, Ron Eschete, Lorraine Feather, David Foster, Gary Foster, Charlie Haden, Julie Kelly, Joe LaBarbera, Ed Polcer, Ruth Price, Jack Sheldon, Bob Sheppard, David Sills, Tierney Sutton, Alan Vache, and Nancy Wilson. John Reynolds a grandson of the great silent movie star ZaSu Pitts, and is one of the great cult guitarists in the Los Angeles area. John's playing and unique entertainment style is admired by the top guitarists in the country. John has worked with Cab Calloway, The Smothers Brothers, Julie Andrews, Andy Williams and Bobby Shore as well as a great many swing bands in the US, Europe, Asia and Australia. Bob Reitmeier is known for his virtuosity and impeccable taste. Bob has played clarinet with a great many legends of jazz including one of Dawn's inspirations, Maxine Sullivan. Bob has also worked and recorded with Bud Freeman, Dan Barrett, Howard Alden, Ray Sherman, Nick Fatool, Keith Ingham and Rebecca Kilgore. John "Butch" Smith was born in Kansas City, and follows in the footsteps of the many great saxophonists in that city. John has been playing for over 40 years, and in that time has worked with dozens of well known bands from the Firehouse 5 to Harlem 2000. Recently he was a charter member of Dan Barrett's Blue Swing, and has recorded for the Arbors and Nagel-Heyer labels. Marc Caparone is one of the younger trumpet players in the classic swing style today, and specializes in the music of the great trumpeters of the 1930's. A dedicated jazz researcher and writer, he made the first research-based recreation of the Buddy Bolden band in 1999. Marc has also worked and recorded with Bobby Gordon, Rebecca Kilgore, Narvin Kimball, John Gill and the Hot Club of San Francisco. Jeff Hamilton is a student of New Orleans legend Cie Frazier, and has performed with many of the best names in traditional jazz and swing since the age of 16. He performs regularly in Europe, the US and Japan, and has made numerous recordings with others and under his own name. Clint Baker is a remarkably talented multi-instrumentalist, who is featured on bass and guitar on this recording. He has traveled the world for nearly 20 years as a musician and performed with his own groups at the Monterey Jazz Festival and the New Orleans Jazz and Heritage festival. He currently tours as bassist with the Hot Club of San Francisco.

Here's what you say about
Dawn Lambeth - Let's Get Lost.