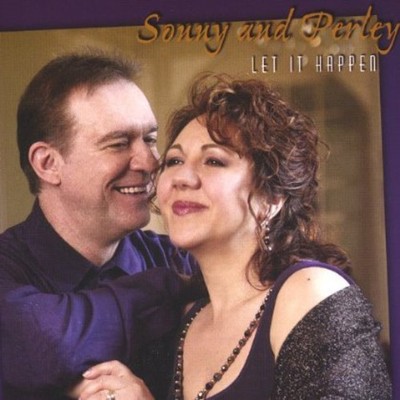 Albany, NY August 30th 04 Redentor Records recording artists Sonny & Perley have just released their third CD "Let it Happen". The CD features Perley Rousseau on vocals and assorted percussion, Tom Charlap on acoustic and electric bass, Mike DelPrete on acoustic bass, Charlie Tokarz on tenor and soprano saxophones, clarinet and flute, and Brian Melick on congas, surdo drum, udu drum and multiple percussion instruments. "Let it Happen" enters into the realm of "aesthetic jazz", a romantic form of jazz that blends beauty and heartfelt emotion with unique arrangements and instrumentation. Vocalist Perley Rousseau expresses song lyrics in Portuguese, French, and Italian as well as in English. This multilingual quality along with multi-percussionist Brian Melick's udu and surdo drum give the CD a wide open international world flavor not usually associated with jazz. "Let it Happen" also opts for a more minimalist sound without traditional drum set, utilizing grand piano, acoustic bass, percussion and horns maintaining a strong sense of rhythm. The exciting duo of Sonny Daye and Perley Rousseau achieves a rare musical symbiosis. The husband and wife team have spent the last several years developing and perfecting their unique blend of Jazz, Brazilian and International Cabaret which has become their musical signature. They engagingly perform the timeless standards of the Great American Songbook such as Gershwin, Berlin and Porter as well as the irresistible Brazilian melodies of Antonio Carlos Jobim. Perley was raised on the jazz greats from day one (Ella was the first recorded voice she remembers hearing), and at 10 years old she was captivated by the Bossa Nova sounds of Sergio Mendez and Brazil 66. With a firm foundation of 6 years of private study in classical technique and many years of performing, Perley has matured into a renowned 'Supersongstress' (Swingtime Magazine) with an "inimitable style" (Paul Elisha WAMC radio). She has the emotional power, swing and improvisational feel of a true jazz singer with a captivating effervescence and saucy stage presence. Yet it is her genuine warmth and love of the music that draws audiences into her unpretentious and heartfelt interpretation of Great American Standards, Brazilian and French songs, many sung in the original language. Sonny Daye's musical training began with the drums which he played in his early years. His love of rhythm and improvisation were firmly established as he immersed himself in the jazz greats of the time. Sonny later moved on to study music in college where his foundation for piano work began. After stints with several bands and free lance work on and off the road, Sonny met Perley when he worked as a substitute drummer in her trio. It was love at first sound. (The two were soon married) Thus began a marital and musical career of sharing, blending and developing their love and talents for song, lyric, rhythm, improvisation, culture and language. They keep a busy schedule touring with their trio, quartet or quintet performing for concerts, festivals and cabaret shows. Their three CD releases 'Love Dance' 1996, 'East of the Sun' 1999, and "Let It Happen" 2004 have generated international air play and received critical acclaim. It is in live performance, however, where Sonny and Perley truly shine. Throughout New York, New England and in Europe, the duo has captivated audiences with their warmth, musical honesty and broad repertoire often sprinkled with spontaneous, charming and humorous banter that only a 20 year marriage can enliven!

Here's what you say about
Sonny & Perley - Let It Happen.