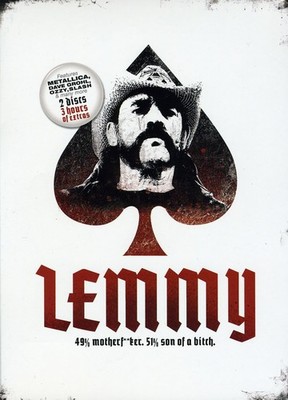 Motorhead singer and bassist Lemmy Kilmister has spent the better part of the past four decades as the living embodiment of the rock and roll lifestyle. Four years in the making, the critically acclaimed documentary LEMMY: 49% MOTHEF*#kER, 51% SON OF A B*#CH gives fans an unprecedented and completely surprising look into his world. Directed by Greg Olliver and Wes Orshoski, the film reveals Lemmy as never before and has already taken critics by storm, premiering to raves earlier this year at SXSW and screening at film festivals worldwide. Boasting a star-studded lineup including Metallica, Dave Grohl, Ozzy Osbourne, Alice Cooper, Jarvis Cocker, Joan Jett, Billy Bob Thornton, Slash, pro wrestler Triple H, and members of the Clash, Guns'N Roses, Jane's Addiction, and more, the film offers a rare and revealing look at Lemmy's life with candid at-home interviews, studio sessions, and priceless live concert footage.