Laura Chandler - Learning to Be Human 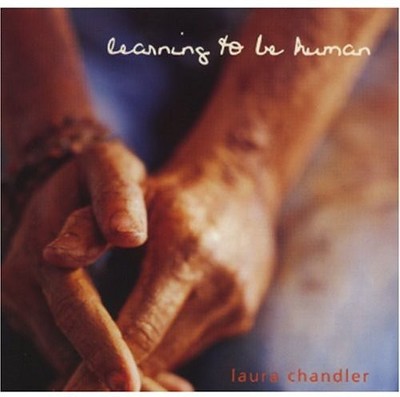 Vicki Barker (Journalist and Radio Personality, formerly with CNN & the BBC) 'Outstanding! This album speaks for a whole generation!' Sandy Shore (Smoothjazz.com Radio): 'Bright ideas, clever lyrics, melodic songs... The compelling San Francisco singer/songwriter has assembled a collection of 11 tracks on her latest release that convincingly relate to the human condition. While Ms. Chandler's voice is as divine as ever, she writes of notions and slices of life that are indeed experienced in the physical realm. Love... Loss... Life... All grown up now, Laura sheds light on her rites of passages and spends compassion freely on both herself and her fellow human beings. On 'Happiness,' she sings, 'I fall down, I just get up and I stumble around in this happiness.' 'Fickle Thing' traipses through the joy/pain of love, 'Makes you feel so good, makes you feel like dying.' Another favorite, 'Ride' is about the perfect simplicity of just driving away from it all with an undercurrent theme of dealing with logistics at another time. Other points of interest: the sultry new version of her original, 'Low Light,' the bittersweet, 'Wilmington,' and the Steely Dan-esque 'Pin-Up Girls.' Laura's got a knack for depth and on LEARNING TO BE HUMAN she relies securely on this skill in a way that isn't trying too hard (which can be a very human thing to do). This evolved asset allows for her new music to flow sweetly and unreservedly off the CD.' BIO: Laura Chandler is a versatile composer who combines elements of jazz, pop and folk music, to create a unique sonic landscape. Her music is made of "crisp shimmering pop and a honey dipped voice coats every word." (Performing Songwriter Magazine). Hailed by Music Reviews Quarterly as "one of the most exciting and important new figures on the scene" they named her self-produced debut album, Mapping Territories, "one of the best releases of the year!" Her latest record, Learning to be Human, was released in 2005, and has been described by Vicki Barker, of the BBC's World Update, as "Outstanding!" A published poet and multi-instrumentalist, Chandler has contributed music to film, television, and commercials. Most recently, her popular single, It's Christmas, Baby!", was featured on Carzino Entertainment's Christmas Compilation album, Holiday at the Beach. She appears alongside veteran artists, Michael McDonald, Craig Chaquico, and Ottmar Liebert. The album was the number one most added album to Smooth Jazz radio play lists in December 2004 according to stations reporting to Smoothjazz.com. Laura was also featured on the 2002 Monterra Vineyards' Compilation CD, Monterra Jazz Sampler, distributed nationwide. In 2001, Chandler's soundtrack for Conde Naste's Lucky Magazine commercial, Cheryl and Me, won numerous awards and earned an appearance on ABC television's, The Worlds Greatest Commercials. The commercial soundtrack features Laura vocal and guitar. Chandler has toured with, or been the supporting act for, many outstanding artists including: Norman Brown, Keb Mo', Chris Isaak, Larry Carlton, Acoustic Alchemy, Iris Dement, and the Violent Femmes, to name a few. She was named "Best of the Bay Area" by Fast Folk Music Magazine, and was also honored by Nashville's renowned Blue Bird Cafe in a tribute to up-and-coming artists, which eventually led to her inclusion in a popular book on songwriters, Looking For Number One. Chandler owns her own record company (Red Cow Records), and a recording studio in San Francsico. She tours nationally and internationally, both solo and with her band. She is an engaging and dynamic performer and has been compared to the diverse likes of Rickie Lee Jones, Tracy Thorn (of Everything but the Girl) and Sarah McLauchlan. As Mitch Ritter of Dirty Linen Magazine says, 'Chandler is ready for migration to divaville!"

Here's what you say about
Laura Chandler - Learning to Be Human.