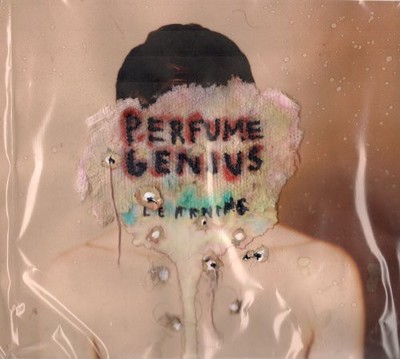 That maxim of beauty springing from the darkest of places is one of the oldest in the book to be sure, but it is nonetheless more than applicable in this instance. After spending his teenage years careening dangerously out of control, Seattle native Mike Hadreas finally faced up to the darkness that plagued him, moved away from New York and threw himself into a spell of self-imposed isolation in his mother's house in the suburbs. It is here that, filled with pent-up emotion and frustration and no way to express it, Hadreas sat down at a piano one day and found his voice as Perfume Genius. He wrote over 10 more songs in the space of a year, with this record, "Learning", the staggering end result. The single "Mr Peterson", released in March, may have captivated listeners with it's strange beauty; it's gorgeous, piano-led simplicity belying it's subject matter of suicide and perversion, but that is only the tip of the iceberg. While the 10 tracks comprising "Learning" may at times feel acutely, almost painfully close to the bone, it is also, at the same time, a deeply cathartic and incredibly moving experience, and one which travels the gamut of human emotion. This is unsurprising perhaps, as Hadreas has sequenced the album in chronological order: The title track is the first song he ever wrote, with the following songs all tracked in order of when he wrote them. This record, therefore, is one which slowly grows and expands over it's running length: From the fragile, ghostly whisper of the title track to the shimmering, slow-motion ballad "When", the sorrowful hymnals of "Gay Angels" to the yearning "You Won't B Here Tomorrow". By the time the album closes with the last, crystalline notes of "Never Did", there's something else too - a sense of healing, of hope amidst the horror, flickering but defiant, enough to make your heart burst. With "Learning", Hadreas has not only managed to wrestle his own personal demons to the ground, but has done it in a way which taps into the broken heart inside US all. This is the human experience, but rubbed raw and laid bare.

Here's what you say about
Perfume Genius - Learning.