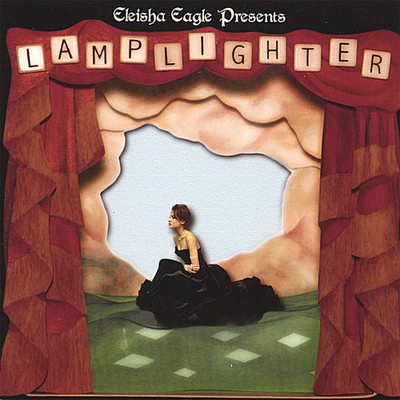 Can You imagine what Queen would have sounded like had Freddie Mercury been a woman and Brian May chosen the piano over guitar? Interested? So was Eleisha Eagle, an independent artist known for her theatrical live shows. She took the stage to the studio and produced a mini-musical of her experiences, complete with tap dances and chorus girls. You don't need to be a Broadway buff to appreciate Eagle's nod to the Fred Astaire and Ginger Rogers era of entertain ment. It's all on the new CD - 'Lamplighter'. A collection of sets painted with words and melodies. REVIEW by BRAD GOINS: Lamplighter, the newest CD from L.A. resident and Lake Charles native Eleisha Eagle may get lumped in with early Tori Amos and like sounds. There's nothing wrong with that. But to my ears, Eagle's new disc sounds much closer to Bowie (especially Hunky Dory and the first two Anthony Newley-inspired albums). I even hear, I think, a bit of Bowie's disciples, the neo-glitter band Placebo, in this CD, in the sometimes androgynous singing, quirky lyrics and otherworldly sound effects - especially the Mellotron-like sound that keeps popping up to great effect throughout the record. Eagle only approaches the raw force of Placebo once - and that's in the stunning, apocalyptic, large-scale, noisy, orchestral climax to 'My Level.' This exquisitely produced clamor is an equal to the sonic meltdowns in Beck's 'Lonesome Tears' and Godspeed You! Black Emperor's 'Sleep.' The songs on Eagle's Lamplighter CD are, to my ear, really much closer to cabaret than mainstream pop or rock. Like Sondheim and Bacharach, Eagle is always working with melodies that are at least interesting. And for the first time, she shows the ability to produce really beautiful hooks. (Hear the end of the 'Overture,' the chorus of 'Avenue of Smiles' and the heartrending 'One Part Two.') The cabaret sound is all over the record, for example in the bombastic piano at the beginning of 'Astronaut' or the clever, campy Nina Hagenesque punk-cabaret of 'Oh So Sorry.' Sometimes Eagle mixes things up a little, as she does with the Brian May guitar and Queenesque harmony of 'Other Girls' or the melancholy Danny Elfmanesque motif of the centerpiece 'One Part Two.' There's even a short bit of frippery - the McCartneyesque fluff 'Cushions of Explanation.' (Yo! Keep Sir Paul out of the studio at any cost!) Eagle's lyrics aren't all perfect. In 'Other Girls' she says, 'You know, I am sweet and independent ... crazy sometimes. But then who isn't?' The easy answer to that question is ... almost nobody. But in several places, Eagle shows a spot-on understanding of the human condition. Consider the beginning of 'Avenue of Smiles,' which would fit seamlessly into Bowie's semi-autobiographical album Hours: 'I wake up knowing I am nowhere close to where I want to be. I shuffle forward, but I can't get further for the life of me.' In 'My Level,' the singer even admits, 'I don't feel special / I don't feel loved.' These Southwest Louisiana songwriters are getting pretty gutsy. And then there's the chorus of Eagle's killer ballad 'One Part Two': 'So we're at war. And I 'm too scared to ask How long it will last, And what we're fighting for. I'm dodging the defense. I'm trying to make it make sense..' I was so struck with the similarity between that and Portishead's 'Roads,' I couldn't resist quoting the latter: 'Can't anybody see? We've got a war to fight. Never found our way, regardless of what they say. How can it feel this wrong?' That's as a succinct a description of the human condition as I've heard, and Eagle's lyric is right in the same neighborhood. (I notice from a quick look at Eagle's My Space site that she listens not just to Sondheim and Portishead but Tricky as well. See what can happen when young people are free to seek out and listen to the good stuff.) I hope I don't sound as if I'm gushing, but Eagle really has taken a quantum leap past her previous work. Her new disc is a virtual encyclopedia of many of the important sounds of the popular music in the last century. If it gets heard, there's no reason it shouldn't sell as well as any nonmainstream CD. The Up Fronter gives the go ahead for the Repeat button on this one.

Here's what you say about
Eleisha Eagle - Lamplighter.