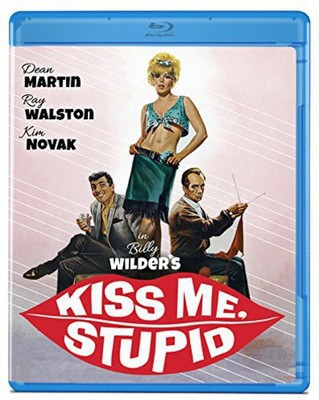 Billy Wilder's comic gem Kiss Me, Stupid stars Dean Martin (Some Came Running, Bells Are Ringing), Ray Walston (South Pacific, TV's My Favorite Martian) and Kim Novak (Vertigo, Pal Joey). When pop crooner Dino (Dean Martin), is detoured to Climax, NV on his way to Las Vegas, he stumbles on fame-hungry, would-be songwriters Orville (Ray Walston) and Barney (Cliff Osmond), the wheels are set in motion for a comedy that is pure Wilder. Collaborating with his longtime screenwriter I.A.L. Diamond (Some Like It Hot, the Apartment), Wilder weaves a comic tale of social mores, sexual gamesmanship and the price of fame. Kiss Me, Stupid features Kim Novak's performance as Polly the Pistol, a waitress, sometimes prostitute, and a woman who at first scorns, then finds herself eager for, domestic bliss. Felicia Farr (3:10 to Yuma, the Player) lends support as Zelda, Orville's long-suffering wife.

Here's what you say about
Kiss Me Stupid.